So after the weekend egg hunt I found out that the Where’s Wally Fabergé egg moves about London and I think I actually passed it on Sunday without even realising it was there on a tour bus in Charing Cross Station!!! How frustrating. It was sitting right underneath my nose. Boohoo.

There was a clue on Tuesday morning that it was still there, but unfortunately I got there an hour and a half late (a friend of mine spotted it earlier) – but it had already moved!! 😦 Fortunately I knew where there was another egg which I spotted on the weekend but I didn’t get a picture of :P… So off I went to find this one…

And so the search continued for Wally…

I was free from work the following morning, so I was off again to search for Wally… The new clue said it was “eggsploring in a 21 acre site…”… I Google searched 21 acre site in London – and it came up with Southbank!! Yay!! Not a far distance from me. ^_^.

I got there, searched for a few minutes… then boom, I found it (that’s with some more help that I found online)! Unfortunately I think a lecture was going on in there, so I couldn’t go in to take a pic!!!! Noooooooo… But I got his backside though (I went back later to get another picture – see more below). 🙂

And I found this one at the same time… 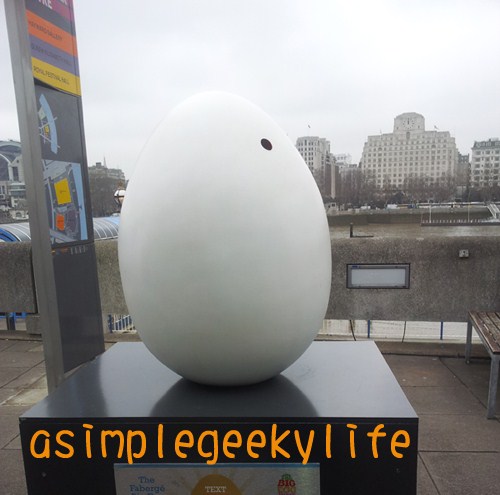 After all of that I got really upset – it meant that after work I had to go back to Southbank and get a full picture of Wally… And so I did… I got there before 6pm, but how unfortunate for me again – the security guards wouldn’t let anyone in the place. Queen Elizabeth Hall doesn’t open until 6pm!!! So not faaaaaaaaaaair!!!!!!!!!! But at least the egg was turned the other way and so I finally got a full view of Wally. ^_^ 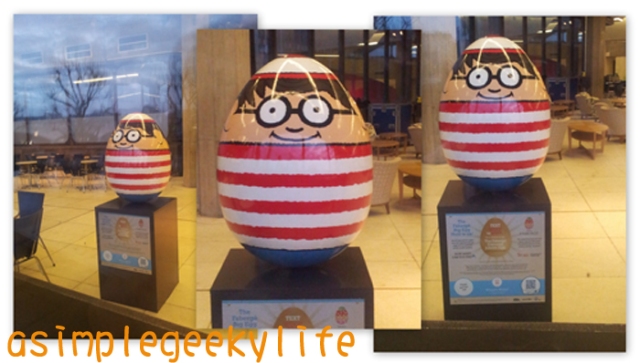 What a search!!!!!!!!!!!!
And don’t forget if you are going out searching for these eggs, don’t forget to text the special codes for you to win that expensive egg prize and raise money for charity!! (^_^)b