The first time I heard about Mayday 五月天 was back in the year 2005. I was in Hong Kong looking for some  music CDs in HMV, I was looking for something different, a band… and I came across Mayday’s 5th Album and I bought it! When I got back to London I listened to their album straight away, and I was surprised at the different sounds they produced… Very Indie style! I loved it and kept being their fan for a long time…
On Saturday 24th March I saw a post by London’s Chinese Spectrum Radio – they were advertising Mayday’s London Concert on March 27th in Wembley Arena. How comes I didn’t know about this??!! So I immediately booked my ticket via ticketmaster. I completely forgot my password since I haven’t used ticketmaster for a very long time. But eventually I booked my ticket! ^_^
This was a birthday present to myself. Yay…!!

When I arrived at Wembley Arena, there were a lot of people about (mostly Chinese students – I must’ve been one of the older looking fans)… The following pictures was only the start of it. 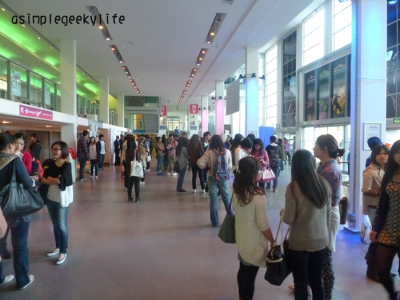 At 6pm, the doors opened!! I thought the concert started at 7pm, but they didn’t start until after 7.30pm, so I was there for a good couple of hours… I should’ve left work late!
Most of the fans there spoke Mandarin and Cantonese… And there were probably a few Taiwanese fans plus some British fans…  🙂

And here’s the members of 五月天 Mayday…

Concert ended quite quickly methinks! I want to hear more songs!
All of us were anticipating for an encore, we stamped our feet and started calling out “wu yue tian”! It took them a while to come back out, but they had to change into their t-shirts (and I guess take a sip of water)… I will allow that! ^^
My Mandarin is only basic, so I understood 70-80% of what they were saying 🙂 Stone spoke in English for a bit – I was very happy! I think Masa spoke in Cantonese like “大家好!”.

Aaaaah! I love you 五月天 Mayday!! Come back again… (By the way, sorry for the bad quality pics – distance is always a problem)…

Update 18:51
Woops not the end of this post just yet… I forgot that I took a few pics on my phone!

Now it’s the end! I hope Mayday does come back again with some new songs… Can’t stop singing the I-N-G song in my head!! ^^

Sorry for taking sooooo long to upload my videos!! Sorry for the quality too… I used my small Panasonic camera 😛