It’s EGGXHAUSTING trying to find  eggs! Covent Garden seems like a tiny area in the central part of London, but it isn’t really.
I tried to find the missing ones I missed out on Tuesday. I found 15 of them yesterday. I was so happy, but so tired after walking around back and forth and circling around some streets twice…
I also found Eggbert! I’m sure it’s ok to say where he was now. The clues given out were quite simple… Jeans store… GAP or Levi?… He was in GAP (the adult store not the baby one, which is where I went into first ¬,¬).
When I got back home. I realised I had some of the ones that I thought I had missing. Clumsy me! I have them, and I was just missing 5 more…
I knew where two were after extensive searching of people’s pictures on Instagram and other clues… So I went back the next day… That’s TODAY!
Oh my… When I went back today I realised I already had this one… So I had 4 missing not 5!! *SIGH*
This one was quite easy to find… Thanks to Instagram pictures 😀
Found this one in the basement in Link (thanks to the clues I read yesterday)… Very hidden!
This one I didn’t see because the shop window is so dark! Very difficult to see (thanks to the Volunteer and a tourist who was also looking for the eggs especially for Lot 25, which I pointed out to him that it was in a shoe shop!).
Before I found the last one I had missing I was listening to this Chinese guy playing some music… Cool stuff!
And finally my very last one! There was actually a different egg in that very same spot on Tuesday. There was a big crowd yesterday so I didn’t see it!!
I even got my book stamped 😀 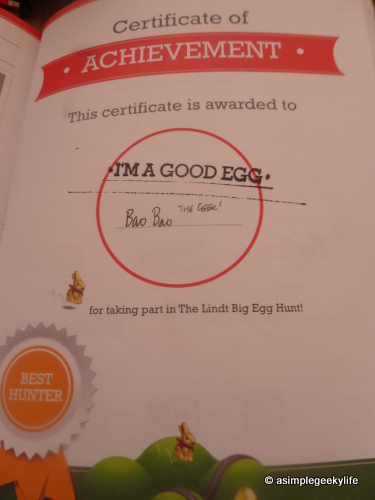 Yay, so I have officially beaten my friend Miss Goldilocks after 3 days in 2 and a half hours. Wahahahahahaha!!!!!! ^_^ Not bad!