Wednesday 10th April
Day 5. We started the day very late. I woke up before Miss Pinky and made breakfast (I always seem make it when we’re on holiday together!! :P).
Unfortunately it rained all morning, and so we watched daytime American TV.
That was the wrong idea. Watching American TV that is. The adverts they showed and the talk shows that were on were a bit too overwhelming for me. There were so many medical ads on that morning (all day and everyday to be exact) I couldn’t believe it. Who on Earth would want to watch this stuff during the day?! I sure wouldn’t. If I wanted medical advice I think I would go to my local GP or those walk in centres… Not from a TV ad!
Finally it stopped raining around 2 pm. We wanted to take the local bus 526 which is just outside the Suites. It comes hourly during the day, so we got the 3:13 pm bus and then got off one stop before its last destination at Inwood / Love Field train station. Just to let you know, all the buses run a circular route in one specific area. Unlike in the UK they run from one end of London to another end and then back on the same route to where they started from!  So you will never get lost in Dallas. But you would in the UK!
We walked around for a bit. I took a few pictures of Inwood Street, and also saw a funny ad. 😀
Went into a couple of liquor stores just to check the prices too. Very cheap stuff in very big bottles!!
Miss Pinky then became hungry. I wasn’t that hungry, but we spotted this smokehouse: Sonny Bryan’s Smokehouse. And I wanted to give it a try. Finally. We ate at an American sort of diner!! 😀 I think this is the original place as there are other branches around Dallas. We saw one in West End… There’s also a few branches in Utah!
Very good food and very nice people. We both loved the pulled meat, and I have a feeling we’ll be there again before we go back home (unfortunately that didn’t happen, 😦 I want pulled meat right now!!).
My geeky rating for the Smokehouse: 4.5/5 (seating was a bit awkward for me)

Address: 2202 Inwood Rd, Dallas, TX, United States
Here’s some more pictures around Inwood as we waited for the bus to go back… 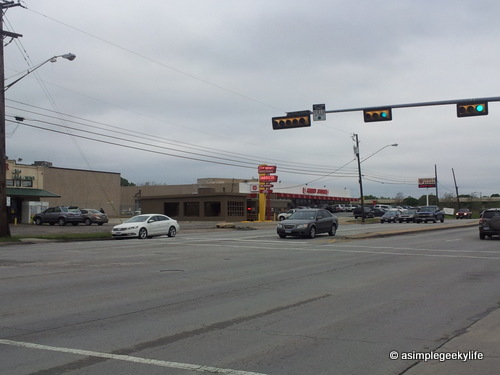 A couple of hours later, we went to eat our free dinner. It was lasagne and sweet bread that day. It was ok. Miss Pinky didn’t like it though…
Day 5 ended early!