Woah! Why haven’t I discovered 3D origami in the first place?!

As an origami fanatic (who likes to make all the easy folds and not the hard ones) I found 3D origami quite easy, compelling at moments and a way of spending time in front of the laptop watching Korean, Chinese and Taiwanese dramas. Yes, I watch online stuff. Doesn’t anyone else?! 3D origami is also a great way of giving a gift to someone too. ^_^

Well, this first model which I tried to copy from a YouTube video took me 5 hours to make. The pieces take forever to make and because I used thick white paper in this model it took me longer than expected. This Hello Kitty went to a colleague’s 1 year old girl, and so I took a few pictures before it went to its new home. Hopefully it’s just sitting on top of a cupboard somewhere… Friends said to me it looked either like an owl or it had a stroke. Not impressed friends! ¬_¬
One of those friends is from Denmark who I’m calling Mr EvilMonkey from now on. An ex-colleague of mine. He loves Family Guy, and (I think) he challenged me to make Evil Monkey as it is one of his favourite characters in the cartoon. Challenge accepted… Here I used a penguin design I found on YouTube, and then I just changed the details i.e. arms, feet, ears and tail… I also had no brown paper, so I made him into the Golden Evil Monkey!! 😀 Mr EvilMonkey loves it, and I will give this to him whenever I ever see him in the future. XD

As soon as my friends saw the Golden Evil Monkey, Miss Pinky declared that I was not working during my working hours!! SHOCKING!! It’s not my fault I’m so clever and such a geek and very, very creative that I can make this in two days after working hours!! 😛 Was very hurt and disappointed with her… But I got Mr Picky to whack her on the head… 😛 I got my revenge…

I was then challenged by Mr Games to make the entire Griffin family from Family Guy. And Miss Pinky said to go for it and finish it before Christmas!! Mr Games told me later in the week that he said it as a joke. ¬,¬” Not funny Mr Games… I spent hours and days making all of these models (just over a month)… They are all my own designs, and I think one of a kind. I’ve only see one picture of Stewie in 3D origami and none of the others. I’m such a clever geek!

Stewie was the first one to make. He was actually quite hard to design because I didn’t know how to make his oval shaped head. But what I should have done was glue it sideways. Nevermind. If someone asks me to make it again, I will change the design.

Peter Griffin, the father, was ok to make, he wasn’t too hard to design except for the head again and his facial features which took me a while to come up with. It was my fourth model, so was still new at 3D origami.

Lois Griffin, the mother was difficult as I had to make her shorter and I added her shoes too. I ripped it apart  at one point and then started again. Her hair was hard to stick on as well! Many minutes of gluing… 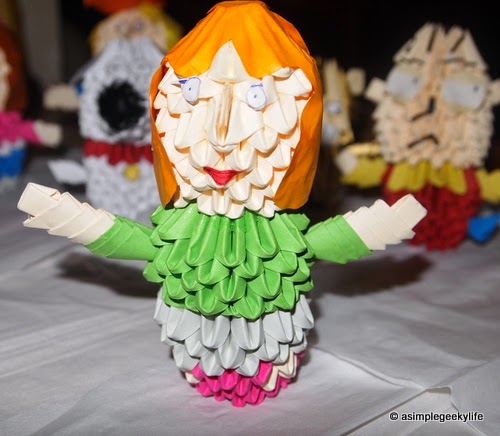 Chris Griffin, the second child of the family, was not hard to design at all! One of the easiest characters, and I actually even made him a cap using normal origami folds. ^_^

Meg Griffin, the eldest daughter. She was easy to make too although I started using different beige paper as I ran out of the other one and this one was thicker, so I had to make her head smaller. But in the end it worked out fine. I couldn’t find an origami hat that could fit onto her head so I just flattened the piece of paper and stuck it on her head. XD

Brian Griffin, the family dog. My favourite design of all!! He was very easy to make although it took me two or three attempts to make the nose as I was using half sized pieces. Was going to make him some legs but that didn’t work out so the pieces went to his arms or in the bin!

The models are up for grabs now… And I’m sure Miss Pinky or Mr EvilMonkey wants the set! Oh dear, who will get them first? Need to charge them for £5 per model or go for eBay style and wait for the highest bidder – that’s for my time and work fee. 😉 (I actually have one bid for £20 from one of my personal friends! :D)… Let’s see how it goes!!… I think Miss Pinky is going to go ballistic if she doesn’t get the set… ¬,¬””

Next challenge is from Mr Picky. He said to make the South Park characters. Oh boy, I think I will start that next year or at Christmas time!! In the meantime I will be making Pikachu from Pokemon, Domo-kun, Winnie The Pooh, and a couple more of Hello Kitty designs using newspaper and normal paper… Plus an aeroplane!

And the challenge after South Park is from Mr Games and I have to make The Simpson’s (just the family of 5). Mr Games said to make every single character in the series. Uh. No way am I doing that!

Anyway, watch this space or wait until the next 3D origami blogpost!! ^_^

p.s. Best paper to use is printer paper 80gsm in weight. It is thin and easy to fold and model. Highest weight of paper you should go up to is 100gsm unless you are highly skilled at folding and piecing the pieces altogether with heavyweight paper!

p.p.s. I have no idea on how to draw my designs in triangles for other people to make but will find a way one day.. or maybe not! 😀

Just bought this from #kikiandmiumiu for £3.49. Bit expensive for a 250ml drink. It's a #hongkongstylemilktea. Not as strong as the ones in Hong Kong, coz they've added sugar to this cold version.
Late for work this morning! Overslept 😴 ... admiring the emptiness of where #ElephantandCastle shopping centre used to be.
Lunch from #StackSando #Vauxhall (Japanese sandwiches) ... Still full. Going to have a light dinner.
Landed in #Heathrow #Terminal5. The most hated airport in #London. 😆 Trying to spot home from this picture.
You think Heathrow Airport is rubbish? Well #HongKongAirport feels terrible food wise. There's nothing to eat at this hour apart from a Thai restaurant. You have to walk to gate 27 to find a non-decent sandwich and stale egg tarts. 😭😭😭
Compared to the UK, #hongkonginternationalairport is so quiet!