Friday 29th November
Time to get up and eat a Big Pot Noodle!! I don’t think you can get these in London yet… I have yet to find this in London China Town…
You may realise by now that it is easy to go to two or three places in HK during the day depending on how much time you have and if you’re fit enough to go around many places in one day!
On this day we went to The Peak which apparently has many different names according to Wiki. It is one of the most popular tourist sites in HK and one of the busiest too!

It’s actually my first time going up there as I’ve always ended up going to a shopping centre or travelling to other parts of HK or China.

If you’re taking public transport make sure you get off at the Bank of China. The queue can get pretty long during the day, so definitely get there early if you’re taking the tram up to The Peak. It’s HK$75 (£6.25) for a return ticket and you can pay by Octopus Card.
The tram journey is about 5 – 10 minutes long. I think most Hong Kongers walk up there or take public transport or run or take a taxi. It’s up to you on how you get up there really! Lots of people actually live near The Peak so there are 4 stops altogether and various people get off. Amazing.
When we got up there we immediately entered into the shopping area… And then we just took the escalators up to the top!
It is spectacular at the top!! It’s even better than going to The Shard in London. Cheaper in fact. Five times cheaper in fact!! 😀 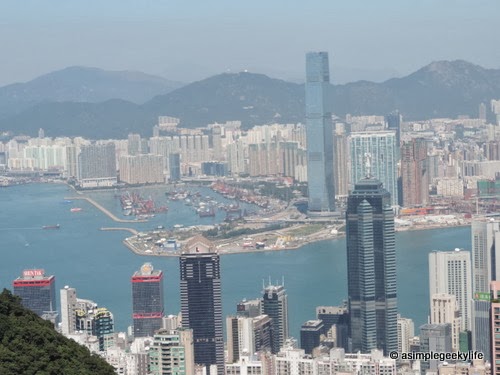 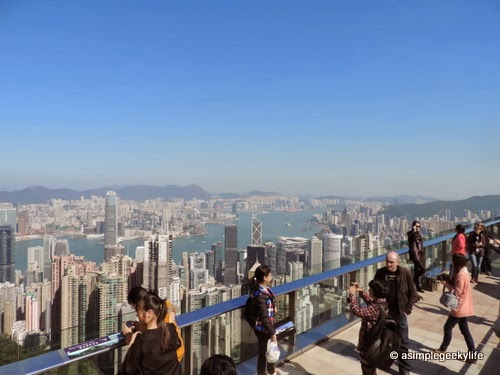 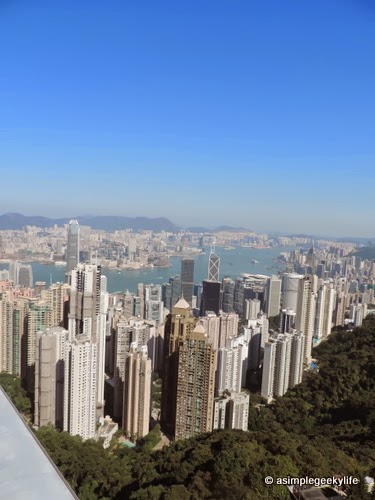 Back down we go, and MummyGeek and I were instantly shopping around…
We had Burger King for lunch. Mr Stingy was very happy!! ^_^ 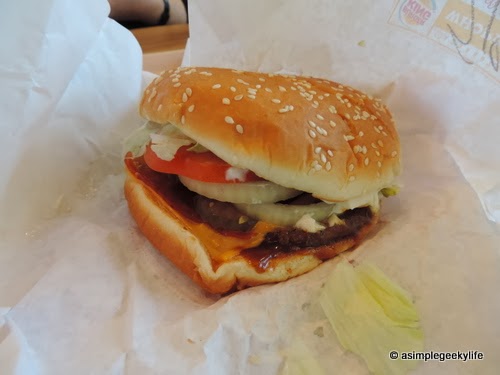 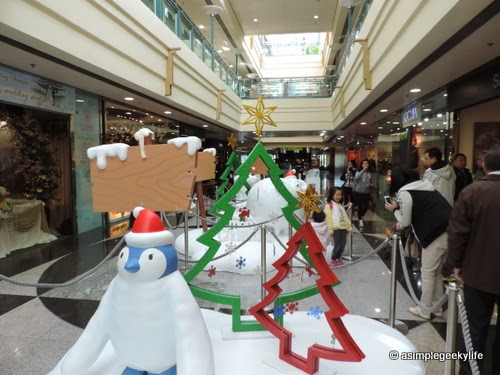 It was time to go back down. We all sat backwards going back down… When we got off, lots of people were waiting just like we were… 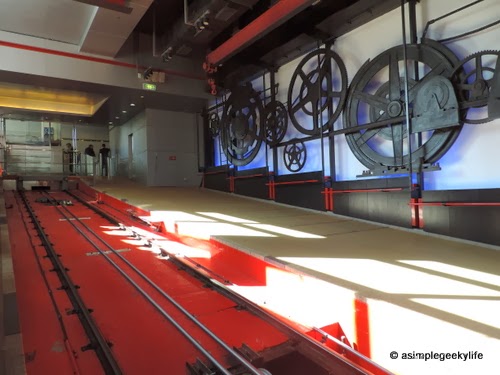 Then we got an open deck bus but sat at the bottom. It was heading towards Central, but then realised we weren’t at our usual Central Pier that heads towards Macau as we wanted to look at some shops around the area. Oh well. So we took a ferry back to Tsim Sha Tsui and I took nice pictures. 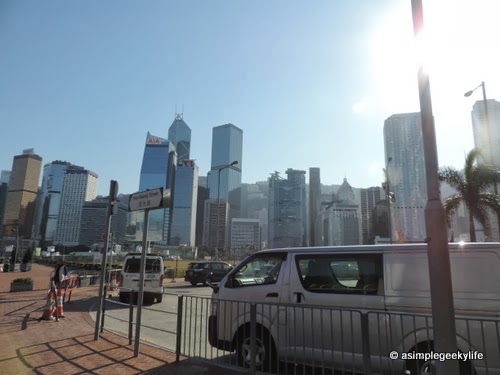 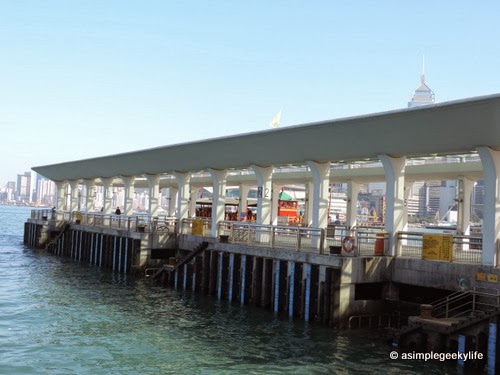 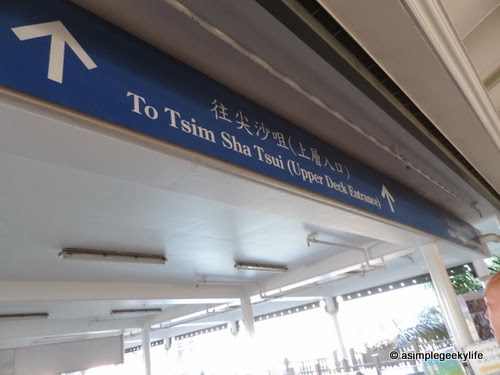 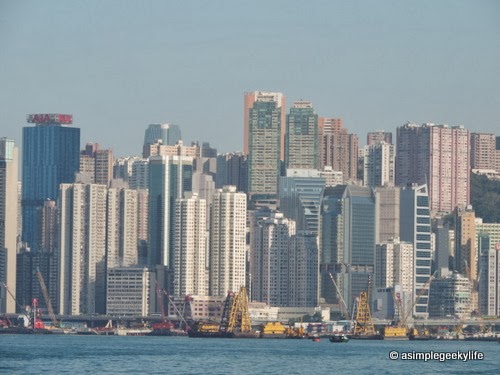 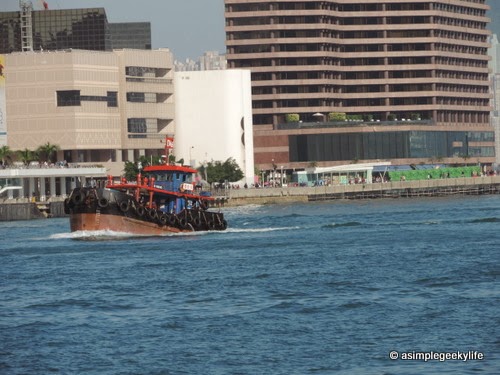 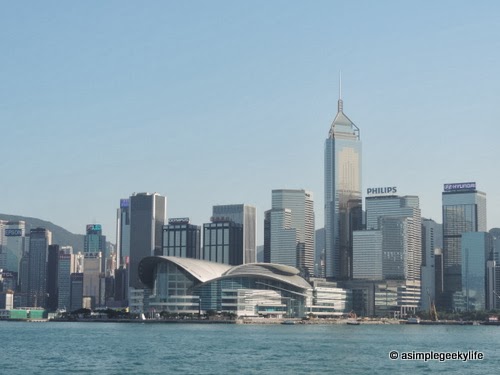 At this point my camera’s battery life ended on me, so I used my phone…
We ended up in Habour City. This is where they have a big Christmas display outside. This year it’s a Disney theme! 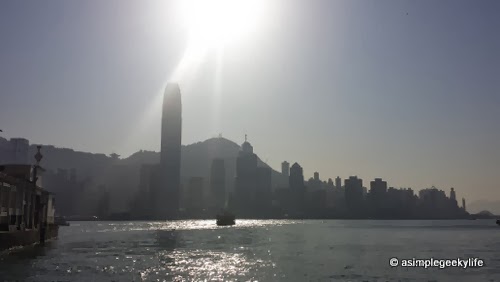 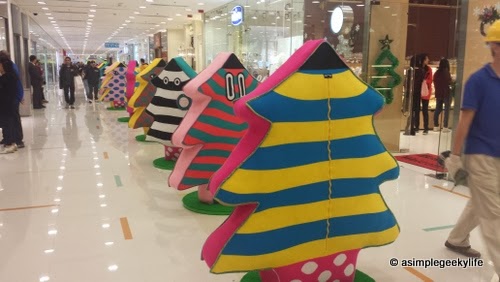 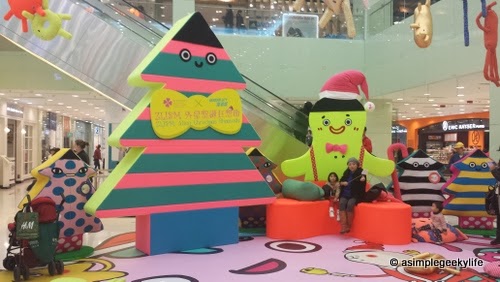 Went around the shopping centre and then I was so exhausted I had a regular Cappuccino at Illy… ^_^ (my aunt says that’s expensive… not for me it isn’t).
Time to go back to the hotel and recharge.
Before dinner with some of my family MummyGeek and I had some street food. Fishballs of different kinds to be exact…
Now it’s time for dinner. We got to this place via taxi. It only costs around HK$20 to get there (cheaper than bus) from the hotel. The taxi asked us if we were from Singapore. Uh, no. England, my dear. England. He even asked us who introduced this restaurant to us, and we said family… Hmmm… I think he was being hesistant about the place… I don’t know who introduced this place called Eat Chinese Restaurant 食棧 to us (I guess one of my cousins or my aunt), but there is a very rude lady who stands at the front “welcoming” the guests. She is so rude which made me give her a cold stare (she saw my cold stare, and I would do it again if I had to). I’m not afraid of being criticized just for waiting outside and seeing if that was the place we needed to be at. But the other waiting staff were so lovely!!
We had a lot of food. The bill ended up being over HK$1000 (that’s about £100). So expensive! Who ordered it all?!! But one of my cousins paid… Never again will I eat such expensive food unless it’s at a Chinese wedding!!
My geeky rating for the food: 5/5
My geeky rating for the service: 3/5 (blame the lady at the front)
I’m even going to give you peeps the address in case some of you want to see what the service is like (if you ever go to HK)!
Address: G/F, 182-188 Junction Rd, Kam Kwok Bldg., Lok Fu, Hong Kong
樂富聯合道182-188號地下金國大廈
p.s. You must dress appropriately or they won’t let you in apparently (MummyGeek saw the sign outside the restaurant).
Friday was the most tiring and busiest day of all!!
End of Day 5.
Day 6: http://asimplegeekylife.blogspot.co.uk/2013/12/hong-kong-trip-2013-day-6-cheung-chau.html