Refreshed from my holiday/family visit/rest for the family (not that much rest really) and now it was time to go back to work and off to the Work Christmas parties / dinners!! Yay!! Mr Stingy said to me before this all started that my social life will kill me one day… More like it will kill my bank account if I keep going out and spending. Luckily I didn’t spend much in Hong Kong otherwise I don’t think I would have been able to buy much when I came back!
I had three dinner parties one after the other when I came back to work. This is the first one (dinner party 3 was at work so I won’t be blogging about that)! When I explained to Miss Pinky I would be too busy to see her that week she was actually green-eyed and envious of all these places I was going to without her!! Hahahaha!! I also said to her she needs to find more friends to socialise with… She can find friends, she’s just being lazy with the socialising bit…
I was invited to this party before I went on holiday. It’s actually the first party I’ve been to with this team. A lot of people were invited, but only 19 of us turned up! That was ok… small dinner party is what I needed… My colleague who organised this is Polish, and she chose a poshy type of Polish restaurant – Baltic Restaurant. Well the interior was posh, but I’m not quite sure about the food…

I started off with a couple of drinks, a Rhubarb Punch cocktail (I got a disapproval from my colleague ¬,¬””) and an Orange and Spice shot. I had bread in between, since some of my colleagues were late!!

There was a small selection on the Christmas menu but we got to choose our mains and desserts.

Here’s the starters… They weren’t too bad, but I wish I wasn’t so shy about getting the food… I think the tables were too wide, so it was hard for me to grab the food. 😦

I chose the salmon for my mains. Wrong choice!! Why did I choose the salmon?!!!! I had too much meaty stuff in Hong Kong, so I wanted fish. Unfortunately it wasn’t filling even with the sides that came separately. I think the sides should have been on the plate instead of us having to grab and split.

My colleagues chose the chicken kiev and some chose the pork… It was too filling they said! Oh, why did I choose the salmon…

I chose another cocktail called Kraken Express in between starters and mains… this was not bad. Those who like strong espresso coffee should go for it!

However I chose the right dessert. This is the caramelised hazelnut parfait with pear compote. This was smooth, and made my meal filling in the end.

I had a small taste of the cheesecake, and I’m happy I didn’t go for it even though I’m a cheesecake fan. The cheese they used tasted like Dairylea… hmmm… try Philadelphia, it’s better. ¬,¬”” One of my colleagues complained that wasn’t enough white chocolate… she couldn’t taste it!

The evening ended with this last shot of this alcoholic strawberry… brilliant stuff! 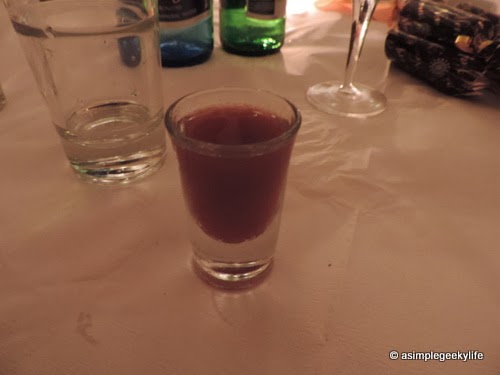 Total bill I believe came up to £400 that included the drinks which were being paid separately. Woah!! Well my colleagues are richer than me, so that’s ok (for me)!! I paid £31… The meal was £28, but I think our table was booked for 20 people originally, so we had to cough up £2 more… That’s ok with me!

Good points:
– Very modern Polish restaurant… check out the artwork, ceiling and decor
– Easy to get to, nearest Tube station is Southwark Station
– Friendly service
– Funky toilets!!
– Try out some of the cocktails 😀

Bad points:
– Food wasn’t entirely filling for me (because I had the salmon), but it is posh style… and I bet their usual menu is better than this!
– The lighting where I was sitting was too dark – I prefer a brightly lit restaurant (so I can take pictures)