Day 3 – March 23rd 2014
It was time to go home! That was a quick trip to Paris wasn’t it? I think next time if I go again, I definitely think Miss Pinky and I need to explore the areas a bit more. Find more French food and eat more baguettes. Miss Pinky had a lot of baguettes by the way… Fresh French bread is the best!!
We didn’t eat breakfast, well I ate a sandwich that I bought the night before. It was disgusting so I threw the crust and the remainder away. Was also getting used to the Nespresso machine… I want one to use at work!!
We got to Gallieni Metro station before 10am using the M9 route to Republique and changing to the M3 line to Gallieni. We should have taken this route to the hotel!! So much easier!! Anyway we waited for a bit, queued to check in and then waited for the coach… It was practically late. Don’t know how the driver was going to get everyone on in time… But he did. I have to say the French drivers are not very interactive, English is so-so but very good at getting us around in time! Make sure you queue quickly as people actually push in front which is not fair at all. Miss Pinky was laughing angrily I bet. But I think we got the best seat because I got to jump off before the people in front and those in the rear seats. ^_^
Our first stop was at a gas station… I was practically hungry and so I ordered in French… Je voudrais une maxi salami baguette… and pointing at the baguette. XD At least I remember the basics…
I ate half on the coach… It was good, a bit salty and needed more pickles…
15 minutes later we were back on the coach and we reached Calais… We were getting the ferry back to England!! Oh wow, I haven’t been on one of these ferries for years… decades maybe…!! Miss Pinky doesn’t like boats or water so it was unfortunate for her but we got through it all.
Just need to point out, security and passport checks are quite tight. One of the passengers on our coach was taken off because he didn’t have the right documentation. So make sure your passport is in date and you have the right visas too!! And travel safe.

It felt like we were going to be at the port forever. But finally we got on the ferry and it took as less than 2 hours to cross the English Channel. I think Miss Pinky was relieved… 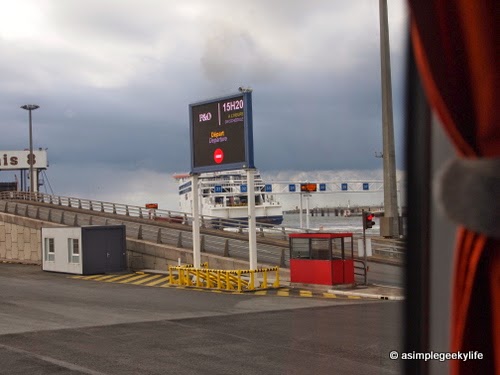 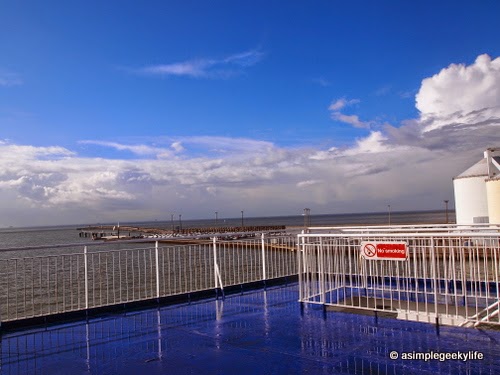 So it was time to get back into London. The journey took at least 8 hours in total. An hour longer than expected I believe. It was a fun journey to Paris and back. Hope to experience more next time with a bit of improvement to my French… And also find more Chinese restaurants to speak Mandarin. ^_^
Remember the basics people:
Bonjour = Hello (polite)
Bonsoir (bon-swaar) = Good evening
C’est combien? = How much?
Merci = Thank you
Merci beaucoup = Thank you very much
End of Day 3.