I live less than half an hour away (by bus) from Buckingham Palace, I am practically the Royal Family’s neighbour (well about 3 miles away with the River in between). Heheh. Lastminute.com are selling cheap tickets to enter Buckingham Palace at the moment whilst HRH The Queen is on holiday, and I found myself thinking I need to at least to do something this summer (because I’m not going on holiday until later in the year). So yeah, I’m going to Buckingham Palace.
I’m not a crazy fan on the Royal Fan, but I like the updates (from the media) of their lifestyle etc., etc… I find them as normal as any other family however richer with a status.
So I went on Sunday 17th (yesterday), the tourists were up and ready to explore London already. Most of us Londoners would be asleep at the time I went out (that was 9.15 am)! Most shops don’t open at this time of day, but at least Buckingham Palace did … I walked from Westminster, alongside St James’s Park and just about to cross the road when a small army of guards appeared on horseback. ^^
The ticket office is right next door (to the left if you’re entering via St James’s Park) of Buckingham Palace Gate, all signs are very clear, so you can’t miss a thing!
Got my ticket, and there was a little wait to enter (I think they opened around 5 minutes early), you will be going through a security check just like if you’re at the airport… and the only unfortunate part of this tour is that you can’t use your mobiles or take pictures inside the palace. 😦 So sad.
I took an audio tour (which is useful if you can’t take pictures), and the tour takes about an hour and a half or less if you whizz around the rooms and don’t stop to look at the displays and pictures… Just imagine yourself in a big castle and an art gallery combined together!
I didn’t buy any books or souvenirs, but I did stop by the Garden Cafe to enjoy some cakes and ice coffee.
The Chocolate Biscuit Cake caught my attention, so I had to get that… and I do like a Fraiser (unfortunately the strawberries were sour)… But the ice coffee was brilliant!! I think coffee shops need to have a taste of this, it tasted sweet and was definitely made with quality coffee. (I wonder what brand of coffee they used).
Well we couldn’t take pictures of the inside but we could from the outside… The Royal Family’s garden is massive, and I’m sure they enjoy long walks around the gardens. ^^ 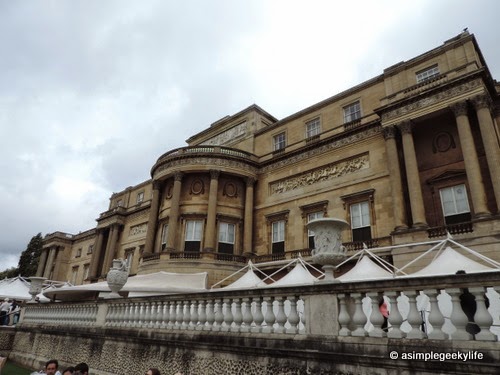 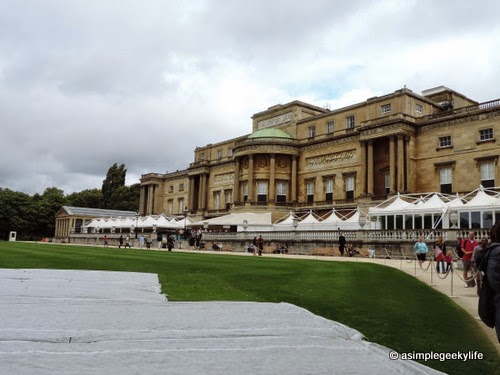 At the end, you will end up in Grosvenor Place… so make sure you know how to get home or back into Central London!
I enjoyed the tour but I think it’s a tour mainly for the tourists. I think most Londoners would not enjoy this tour unless they are super fans of the Royal Family, like art galleries or simply want to visit a palace. Simply put it this way – I would rather go to the National Gallery or the British Museum for free. ¬,¬”” But your ticket can be converted to a year’s pass, but my ticket couldn’t as I didn’t buy it directly from the Palace.
p.s. Staff are everywhere, so don’t even attempt to take your cameras or phones out!
Website: http://www.royalcollection.org.uk/