Been a bit lazy recently. I’m blaming the weather! 😛

Koreans (and simply Asians alike) love weird food, so potato noodles are definitely one of the weirdest food products I have seen from a Korean convenience store.

This one had to be tried, and for 99p it is probably worth it. Some grocery stores are selling them for over a £1!

Well potato noodles I haven’t seen before, so I wondered how the noodles would look like… They looked ordinary but massive!

And it came out like this in the end… 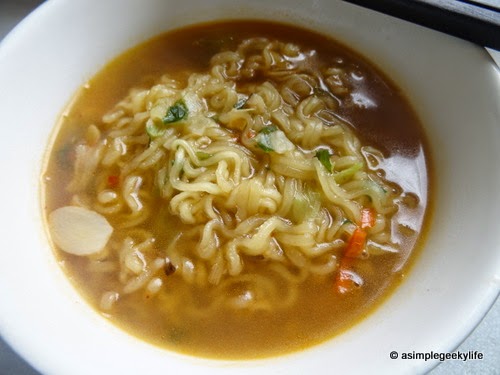 Well, what did I think of them?
They tasted a bit springy, it felt silky in the mouth, the soup was spicy has a finishing potato taste, but not too a lot of that creamy mushy potato taste. You also taste some potato bits
It maybe a bit too spicy but I think this could be more creamy soup or a meaty soup instead.
Probably won’t buy these again but it’s a nice difference to the other packet noodles we eat these days. 🙂