I was going to blog about these strange Korean food snacks last month but I got too lazy to think about blogging… It was too hot… Yes blame the weather!
I bought all of these at Centre Point Food Store which is now on New Oxford Street. I was being nosey as I hadn’t been there for a while. For one thing the store has improved with the space that they have and service is the same as usual (meaning: with strange faces).
But anyway, here’s some of the snacks I bought. Quite cheap in fact!
I started off with these fizzy straws. Korean style obviously. Unlike the American version these are less plasticky and more like the British version I would say.
This one is apple sour not lemon. It’s sour. Not too much sugar. Its a little hard but chewable but definitely tastes better than the American stuff. I think it was on sale for 15p. ^_^
This one is strawberry. This one isn’t sour at all, but the apple one, it’s a little to bite into and better than the American stuff. Something like the British ones.
Ah, this one was the one I wanted to try the most. It’s called Kikiriki Drumstix from Nongshim (they are the ones who create all those delicious spicy Korean noodles). Fried chicken sounded odd at first, but when you get those weird Walker crisps flavours coming out this autumn, you cannot help but thank someone that this is actually a normal flavour.

Look at these snacks! They really look like mini chicken drumsticks. They are actually cornsnacks. The crispiness of the snack resembles the fried chicken and the aftertaste really tastes like chicken. They are very good to snack on if you’re craving for some fried chicken. You don’t think it but there’s a lot of these little snacks in the packet, so you will never be tired! And it only cost 99p. Bargain!

I bought this one out of curiosity and just wondered in if these would taste like fried spicy squid.

When you look inside each snack is shaped into a sea creature, They taste like sweet squid crisps, its a bit fishy, but if you love squid you just might like this and it’s not spicy. There’s lots of little snacks in the packet and I still haven’t finished them. Costs 99p too!! Don’t think I’ll buy this again though… not my type of fishy snack.

And last but not least are these Lotte Vegetable Crackers. 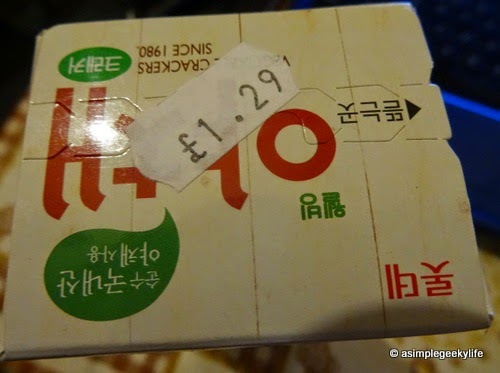 Crackers with vegetable products… Smells strongly of spring onions and carrots. They taste quite sweet because of the carrots and peppers added in. These look healthy, but not sure if they are. If you like Ritz biscuits with some small flavouring, then these are for you. Cost £1.29. Not bad. There’s 3 small packets, so I get you can enjoy them anywhere.

I want more of that Fried Chicken. 😀