My colleague (calling him Mr Sporty) seems to be an addict to all of these pieces I’m making, so I made a few more for him and his family.
Lianne Sanderson – Women’s England Football player. I never really paid much attention to the women’s team. Not sure why… I made three of her and then I remembered that I forgot to add her beauty spot! It’s hard making a ball out paper, so I bought some polystyrene balls and coloured them in. 😀 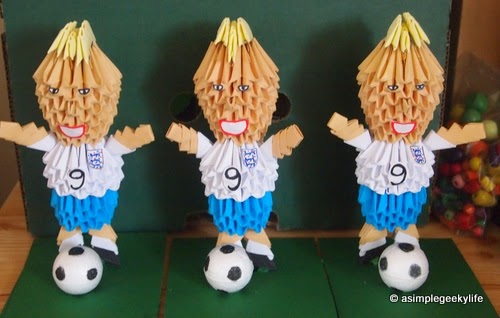 Rafael Nadal – He asked me to make Nadal, and I thought really hard about this one as he would look like the Federer that I made earlier in the year… Well I changed the colours of the racquet, so that’s one difference! 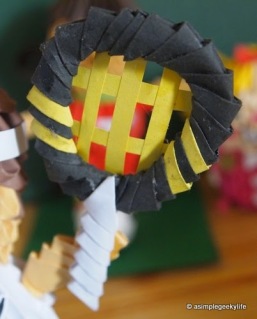 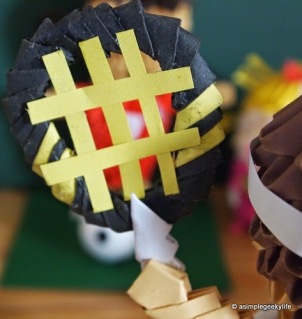 Cristiano Ronaldo – and another one for Mr Sporty… This one is similar to the Lianne Sanderson ones. I’ve had so much practice in making football players now! I have no idea what he is going to ask me to make next. Let’s just hope it’s something simple.

This is a no-name basketball player in a Chicago Bull‘s outfit (a colleague’s son) – I made this (including the basketball hoop) in 3 and a half hours! I watched 5 episodes of 24 in one sitting. Yes, I was dazed after making this but so proud of myself. My colleague needed this the next day as it was her son’s birthday. Thankfully I had extra pieces made by MummyGeek. ^___^ The basketball is again a polystyrene ball coloured in orange with black lines. I used a print out of the Chicago Bull logo which I found online.

Very proud to be a 3D origamist although I think some people would think we shouldn’t be using glue… Glue is just used so that it doesn’t fall apart during transportation, I’ve had a few that were destroyed because I didn’t glue it all together. ^_^

It's that time of year again! Gosh #CentralLondon is busy this weekend! Lots of Christmas shoppers out and about. Celebrating Miss Pinky's birthday by going on a Toot bus tour. So coooold! Spotted #TheSnowman at #WaterstonesPiccadilly ⛄️ Happy Shopping peeps!
Bought some souvenirs from the Victoria and Albert Museum shop. #HallyuExhibition #hallyuwave #VictoriaandAlbertMuseum#KoreanWave
Went to the #HallyuExhibition in #VictoriaandAlbertMuseum today. Already immersed myself in Korean culture for the past couple of decades. So why not... #KoreanWave
3000th Instagram Post!! Finally took the #ElizabethLine yesterday from #Whitechapel to #AbbeyWood.
The queues (before 7pm today) to see the Queen Lying in State from afar on a bus from Southwark Park and Tower Bridge. So glad I decided not to queue. #SouthwarkPark #TowerBridge #queue #queenlyinginstate
Commemorating the day of my booster jab. Got Moderna this time. No one's queuing at Westminster Bridge at the moment for Westminster Abbey... I will not be queuing and walking miles to see The Queen's coffin. 😅