Fact: Did you know that 3D origami is originally Chinese and is also known as Golden Venture Folding as it was popularized by some illegal Chinese immigrants who were aboard a ship called Golden Venture which was heading to the USA. Think I need to make a swan!
All of the following pieces are all for my colleagues. They just love to give me a really hard challenge.
Elephant – this was a hard design, I had a look at other people’s designs and just came up with this one. It was my best effort since making the lion! ^_^ I hope Mrs Jewelry likes it!!
Minion – the person who bought the Family Guy set wanted a minion for his partner and so I created this really cute minion. ʘ‿ʘ

José Mourhino – Mrs Jewelry keeps asking for more and she really wanted a sports player. Well she wanted José Mourhino in a Chelsea football suit. Hmmm. It doesn’t look like him though. I tried. ¬,¬”

Pumpkin – Before I went to Japan, I made this pumpkin as it was Halloween. There’s no point taking pictures of the sides and back since it’s all the same colour and no change in patterns. ｡｡(ﾉ´д)ﾉ

Santa Claus – Mrs Hen wanted a big Santa Claus for her living room, so I spent one Friday evening… maybe a good 5 to 6 hours. Such hard work making him!! Even given him an empty brown sack.

Had to make another Batman for Master H as Miss Pinky destroyed the one I made for him a few months ago! Geez Miss Pinky!!!! 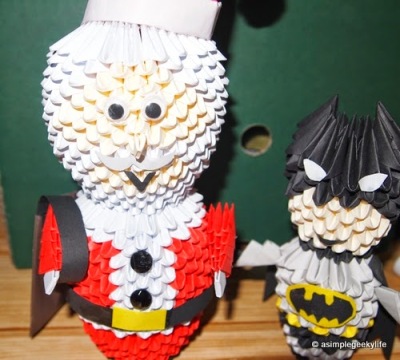 One colleague of mine who just came back from maternity leave asked if I could make Tom and Jerry for her son for Christmas and I said I would try… It was hard work making their faces. I cheated on Jerry’s face… They are not my greatest designs…

Have a few more designs to show, so come back!!