Thursday 19th March
Well the day started late… I had a good 6 hours sleep then I kept waking up and falling asleep. So tired. I could have done with an extra hours sleep. I was finally getting into the New York time zone. Before going out I had a couple of danishes – one cream cheese and one strawberries & cream. It was something weird I had to try out in New York. I think prefer the European danish. These were out of the ordinary. >,<"" 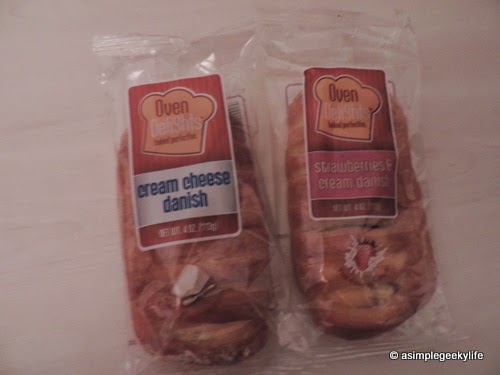 We all left after 11, it was a nice sunny cool day, not as cold as the day before. Had McDonald’s which consisted of two hamburgers, fries and Lime Diet Coke at $6.99 (~£4.70). I personally like the British hamburgers, they’re a little sweeter. The Americans add too much salt! We then made our way to 5th Avenue to look for trainers and souvenirs.
Then next we went into Macy’s. Everything was too expensive and we actually didn’t buy anything but I enjoyed going up and down those old escalators. ^_^ I’m sure it was cheaper in Dallas when we went into Macy’s…
In the end we went to Brooklyn Bridge because we had nothing much to do. So we took the Metro from 34th Street. Got the R train which took forever to come. Had to ask a young lady to see if the R train came on that platform… and we got off at Court St in Brooklyn.

Brooklyn actually looks nice! Better than the city in terms of peace and quiet, plus there was hardly any beeping horns. 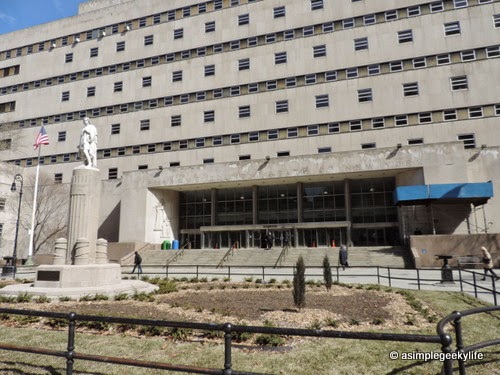 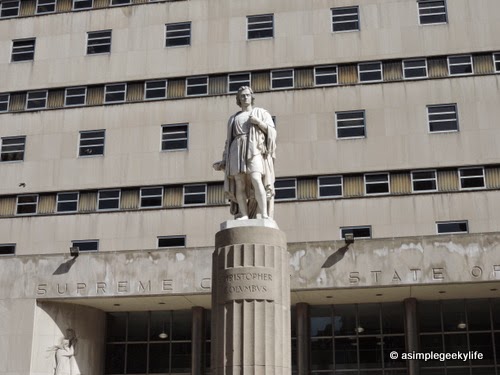 We had to get directions from a lady on how to get onto the Brooklyn Bridge otherwise we would’ve ended up on the traffic side. 😛
I took lots pictures whilst on the walking path. Must point out that the cyclists hate us pedestrians (sorry but we pedestrians hate the cyclists too >.<""). It's difficult to share the same path that's split for cyclists and pedestrians… see this article when a cyclist goes in the pedestrian lane and this article when pedestrians get it wrong. Not nice. The pathway should be pedestrianised during the day between 9 am to 6 pm and cyclists for the evening between 6 pm till 9 am the next day!! 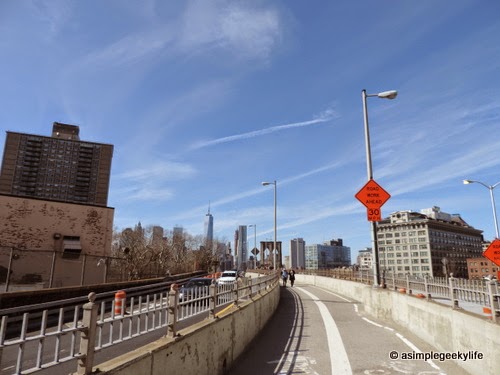 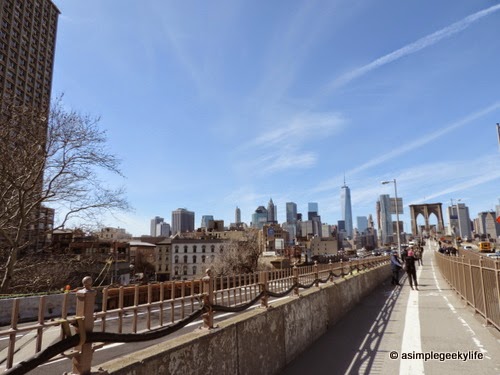 Yay! Statue of Liberty! Finally got to see it via a long camera lens. 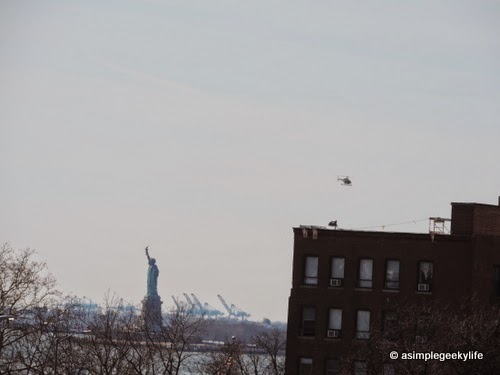 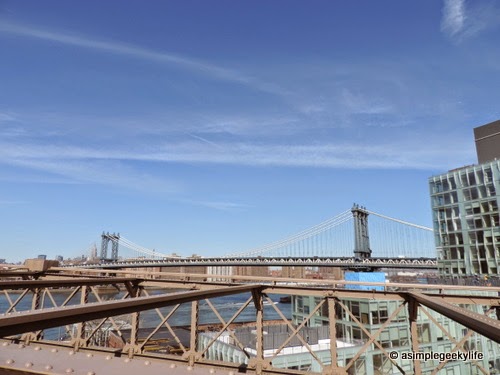 Can you spot Miss Pinky and Mr Picky? Will they get run into from this cyclist…? Lol!! ^_^ 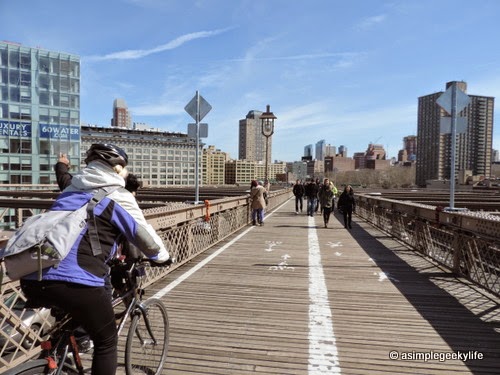 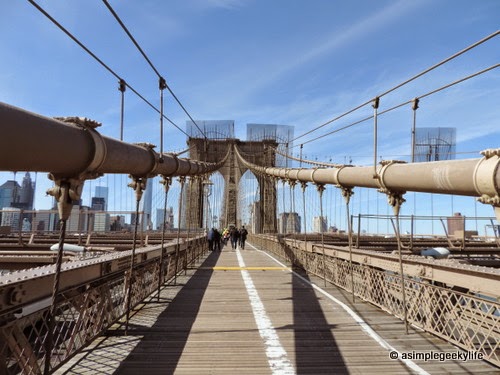 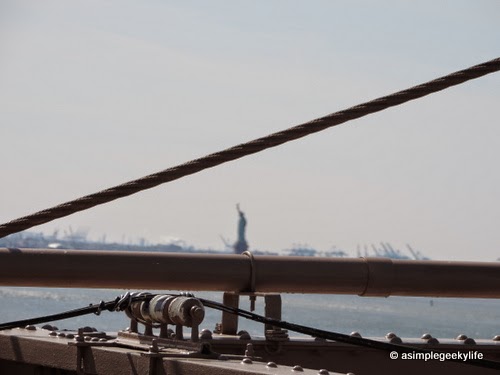 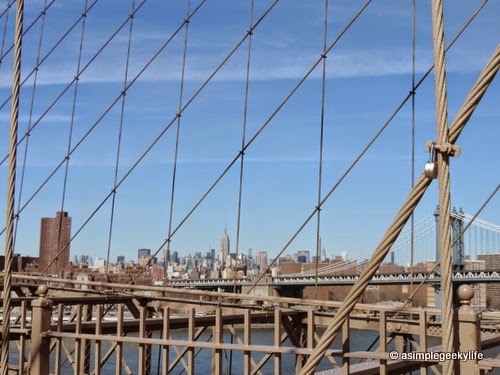 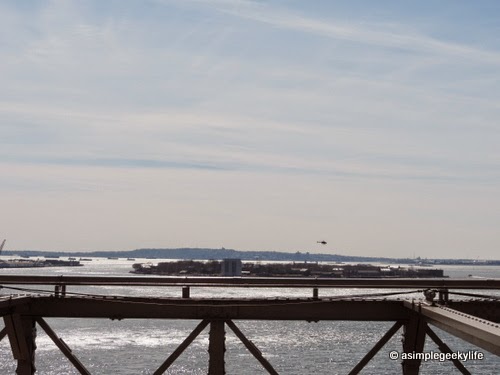 Busker at the other end of the bridge.

Manhattan during the day. 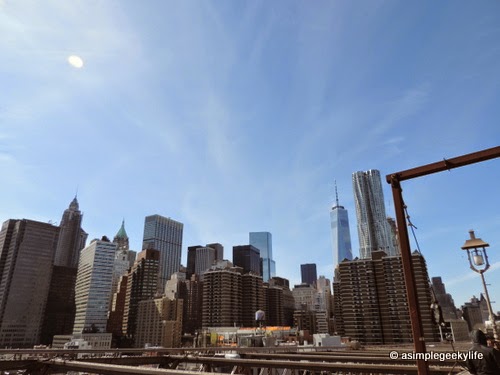 We took the Metro back from City Hall and unfortunately we topped up our Metro card with a very rude lady who rolled her eyes at Miss Pinky. I think Miss Pinky should’ve have rolled her eyes back and tell her to pee off. Metro staff are just plain rude! The Metro staff member was already in a foul mood with an elderly gentleman but is it right for her to treat us foreigners with such rudeness. I don’t think so. I might be rude but I always help with people who are lost. Always. 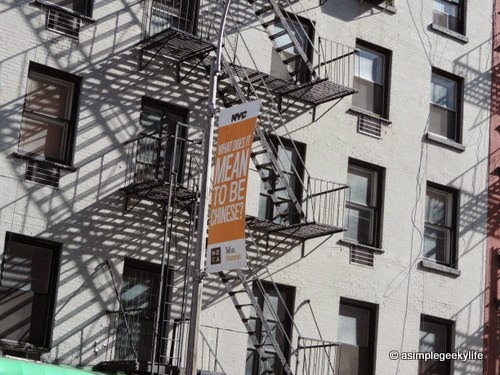 We took the J train to Canal St and then started looking for a trainers store that had sales which we saw during the bus tour… But we couldn’t find the store so we stopped to eat at a Chinese buffet called Lunch Box Buffet. $5 for 5 food items. And it was a dollar for my can of Diet Coke. Mr Picky didn’t have anything but Miss Pinky went ahead. 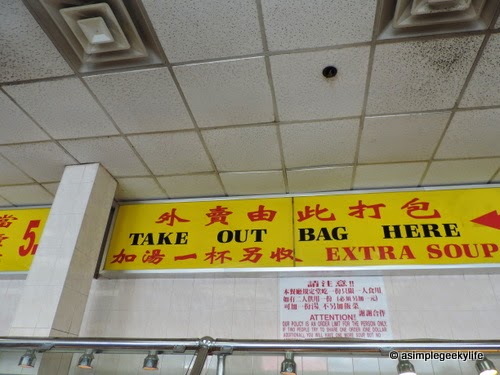 Address: 199 Centre St, New York, NY 10013 United States (Chinatown)
Next it was time to find that trainers store which we eventually found and I got a pair of Converse for my birthday. Thanks Miss Pinky and Mr Picky! ^_________^
Time to return back and we got the R train. Unfortunately the gates we went through you have to turn once otherwise you easily have to pay extra! That sucks, so I paid an extra $2.50 (£1.68) to get onto the Metro. I thought New York was so much better with their transport system. I guess not. They need to start being European and Asian friendly. We use magnetic cards to get through gates!!!!! I think these gates are mainly to stop people from jumping over the gate though… ¬_¬” Typical. Not user friendly.
Got back to 34th St. Did more shopping and then back to Peter Dillon’s for a beer. I did not get hit on this time. Phew. I don’t like American beer by the way – I already knew that when I was in Dallas. Tastes very watery.

Headed back to the hotel, relaxed and waited on the other two before heading back out.
Our last evening meal ended up eating Indian food in Nirvana NY where our bill came to $120 (~£80)!! Thankfully I did not go over budget throughout the whole trip. And we gratefully tipped. Portion size was too big for all of us. Miss Pinky was getting irritable because Mr Picky was being irritating to her (and to me too)… It was an uncomfortable evening…