Friday 20th March – the last leg of the trip
The day started really early. Well 6 am (not that early). Had to shower, finish packing the rest of my stuff and shift out before 7 am. We had already booked an airport shuttle which was $20 (~£13) per person. After being picked up we unfortunately had several other pick ups before we got to the airport and those people were late or we were too early… Not looking good for us trying to get to the airport and aiming to have some breakfast!!
We were stuck in traffic for a good 20 minutes or so and I had this bad feeling that we would be late for the flight. We should have left at 6 am. Who booked that shuttle?! It wasn’t me… Luckily I had already downloaded the United app the night before in case something like this happened or the fact that our flight was going to be cancelled because of the snow that was heading into New York that evening…
Thankfully we hit the high road and our driver sped through to the airport. He got us there just in the nick of time so I tipped the driver 5 bucks. Phew. ^_^ I’m a happy geek. 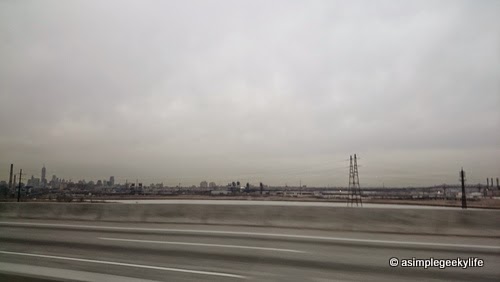 Got to the baggage check in area, and I had a feeling all of our luggage was over the limit. I think mine was underweight, because no way was mine over 32 kg. In Japan, I remembered mine was quite heavy at 18 kg… And this time it weighed 34 kg. Impossible!! Luckily the guy who was checking our stuff let us pass as we couldn’t pack stuff into the third suitcase as he had already let it go through… In the end we didn’t have to pay any extra by shifting some of Miss Pinky’s / Mr Picky’s luggage.The Americans are really nice… especially the airport staff (well some of them). I think this may be our lucky day throughout the whole trip.
We passed security and really in the nick of time as we had a few minutes to spare to go to the loo and grab something to eat and drink on the flight.
As soon as we bought our things it was already time to board. Wow. This has been the fastest and adventurous trip back to London I have ever been on. No waiting around. Maybe we should do this more often… but I don’t think I would want to stress out everyone around me.
Our captain was a lady and this is probably the first time we’ve had a woman fly us on a big airplane… and we left the airport on time too!!
Lunch was ok… The chicken was very bland, rice was not cooked properly… I hate plane food…
Spent most of the trip reading manga Ranma 1/2 which I have not read in a long time and I also listened to music on my iPad.
The final snack was a boring cold turkey and cheese roll… it was horrible. They could’ve at least heated it up before serving it. I only ate a bit of it and some of the filling before turning my nose away from it… 😛 Disgusting.
We landed safely in Heathrow Terminal 2 and Miss Pinky enjoyed the flight this time round – she thinks it’s because we had a woman flying us, but I think it’s because we had fewer clouds in the sky. It was a long walk to passport control… I think I like Gatwick a bit more now. I’m also getting used to the terminal staff asking where I’ve just flown from…

Well 3 countries in less than 5 months is a lot for a person like me. ^_^ Have to save up for the next trip although I’m now scared of flying since there’s been a lot of plane crashes in the past year or so. I will find confidence again to fly! Don’t you worry. The geek will fly again!

The Geek’s Question and Answer Time:

Was 7 days enough to spend time in Manhattan, New York? Yes it was but I think if I had two weeks I wouldn’t have stayed near the city, I would have stayed somewhere cheaper and would’ve walked around more places if Miss Pinky wasn’t preggies.

Was having a third person difficult to spend a holiday with…? Yes, because I didn’t know what Mr Picky was like on holiday. Miss Pinky and I both agree he needs a proper lads holiday and not spend it with two ladies on the go. ^_^ Lol… maybe we’ll all go to Europe instead of somewhere far…

How much money to take with you to New York? I took over £500 but had exchanged all the foreign currency I had remaining to British pounds then to US dollars. So roughly for a week about £600 (I brought roughly the same amount in Dallas and didn’t overspend at all! What a difference). Just remember you need to tip at majority of the diners and restaurants you go to. Not so much at fast food joints which is a relief.

And did I have fun excluding all the emotional baggage and tantrums, lol? Yes indeed!!

Next trip: Not planned yet… Awaiting for people to contact me to go places… 😀