What to do on a Bank Holiday Monday? Well there’s lots of things to do in London and I chose to do another animal thing… again. ^_^
Hidden away on Bethnal Green Road (not that hidden away really) and just around the corner from Brick Lane is cat cafe called Lady Dinah’s Emporium Cafe. It’s been open for over a year and it’s the only cat cafe existing in London at the moment. I adore cats (but I think I’m heading back to liking dogs more, uh oh).
I’ve been waiting for Mr Bear to get some free time to come with me but the longer I waited the longer it took me to book a slot! SIGH. In the end Miss Money reminded me about Lady Dinah’s by showing me pictures of kittens which she wanted to adopt but couldn’t. 😦 Anyway, I was looking at dates and times and thought I could make the really early slot of 9 am hoping that none of my friends would want to go out the night before! But phew, no one did as it was cold and raining last weekend.
I arrived before it opened so I sat at the bus stop for a good 10 to 15 minutes. There were people there already!

When it opened we had to wait at the cafe section before entering. The host could only take 5 people at a time as the tiny room behind the cafe part had two sinks to wash your hands and as you washed your hands you were being told of the rules… i.e. don’t pick up the cats, don’t disturb the cats when sleeping, don’t feed them with your food (as you don’t want them to get fat), don’t use the flash on your phone etc, etc, etc… you get my drift.

I was given the choice of two tables one on the ground floor or one downstairs. I chose the downstairs armchair as it looked spacious and had a feeling the cats there would be more comfortable to jump around and be there to play with you… I ordered a flat white coffee and should have thought about food because I was really hungry afterwards. Nevermind. I could see other people enjoying their food though.
The cats didn’t look that amused with us strangers trying to play with them and trying to stroke them. It was hard work using fish rods, cardboard boxes, bubble wrap and other toys. Just looking at other people trying their best to play with the cats seemed like hard work too! And I don’t think they like cameras that much. Best thing to do is really try your best when they come near you in the mornings!!!

This lovely black cat called Loki let me stroke him twice. He loved it but got bored of me. 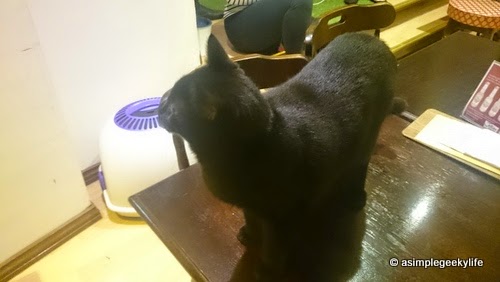 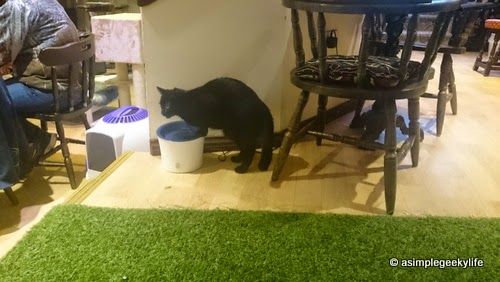 The kittens Lizzie and Alice were the amusing ones they loved to play. This one wiggled her bum before trying to catch the toy on the rod. She got twisted in the string too!! Lol!!
You get an hour and a half in the cafe so I left on time. My bill came to £8.50 (£6 charge for cat care + £2.50 for the coffee). I gave them £10 and said to keep the change. They do try their best in this cafe to keep people and cats amused!
To be completely honest I think more cats are needed in the cafe as there’s just too many adults trying to amuse the cats. In the end I did enjoy myself but it wasn’t enough! I spent an afternoon yesterday with 2 hyper dogs and I think I’m defo a dog person. Woof!
Address: 152-154 Bethnal Green Road, London E2 6DG
Telephone: 0207 729 0953
Website: http://ladydinahs.com/
Follow A Simple Geeky Life on WordPress.com