I had a spontaneous moment where I wanted to try out a newish place which I had seen whilst on the bus heading towards Elephant and Castle many months back (can’t remember how long it’s been open now). This Vietnamese takeaway called Hoa Phuong (which I think is a type of red flower found in Vietnam) is hard to spot if you don’t look out the window on the left hand side whilst going pass Dragon Castle. This takeaway shop used to be a Chinese takeaway which unfortunately I didn’t try out in the past. 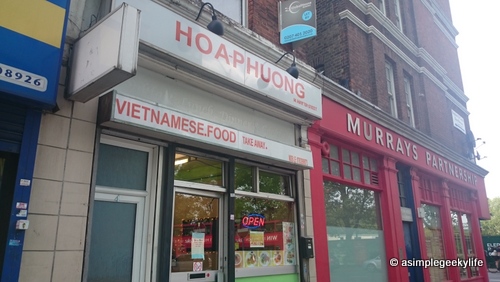 Had a quick look at the menu online but that needs updating because when I looked on the blackboard inside the shop they had some extras.

They even have some seating! 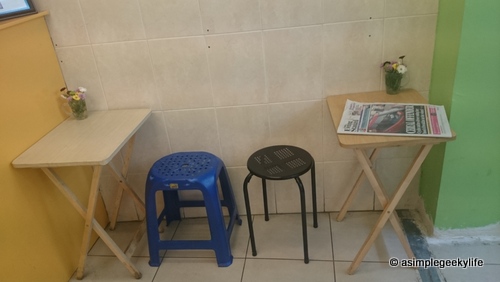 I was greeted by an old Vietnamese lady whose English is not the greatest but I could understand. I made my order and then sat there for a while (about 15 to 20 minutes because I ordered a bit) for my food to be made. I don’t think everything is pre-made… Took a few pictures in the meantime. 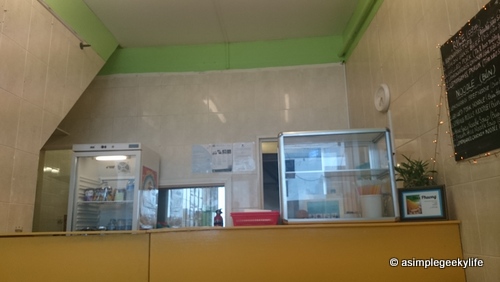 Finally my food was ready. I was very hungry and wanted to get home before everything got cold. Thankfully I know the backstreets and took the shortcut home.
This is the food I ordered. 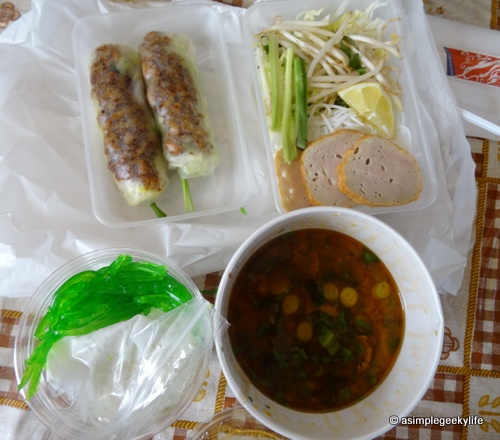 The noodles (not pho, they’re called bun) were not in the soup… I was thinking where are those white noodles… they were hidden underneath the fishcake! ^_^ This is actually the second time I’ve seen a restaurant / takeaway separate the noodles from the rest of the ingredients. Cool! 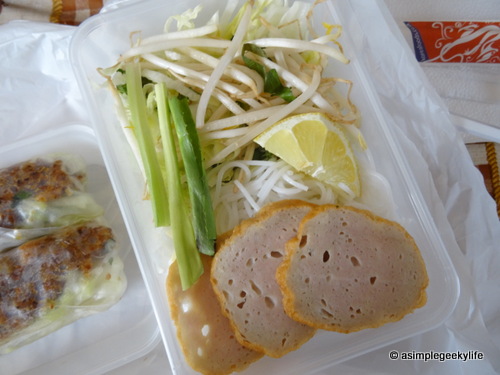 I asked for spicy beef noodles which is why my soup looks dark as some chilli oil was added. This is a different version of Vietnamese noodles as I read on Wiki. It comes from Central Vietnam. The one we’re used to seeing is pho which has a sweeter broth and flatter, thinner noodles. Inside the soup there’s a lot of sliced beef. You will need to dig in to see it. Quite amazed at how much beef was given.

I added the bun, fishcakes and lettuce and started eating. The soup is good stuff, a little spicy, not too sweet and is full of flavour. It’s not too beefy but it had a lot of herbs. The greatest thing about this is that I was never given any coriander and no coriander (I believe) was added to the soup or box of ingredients. So cool!! I love this place already. ^_^ Instead there was some lemongrass and a lot of chopped up lettuce. 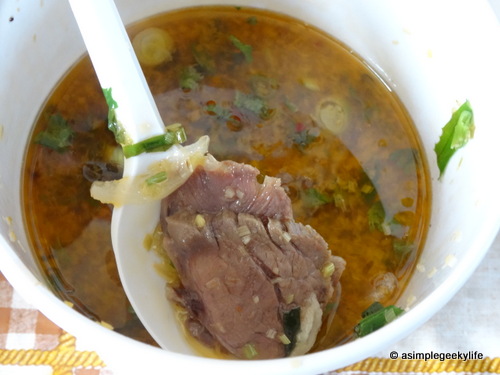 The bun was brilliant too. It was no flat rice noodles, it was thin round noodles which I haven’t seen before. Thick and filling.

Next I started on the grilled pork rolls (goi cuon). A tub of sweet chilli runny sauce is given.

These were amazing. The grilled pork reminded me of Chinese bbq pork without the sweet taste. This type of summer roll is brilliant. I need to know how to make these. ¬,¬””

Finally I had a dessert. Che Mixed Bean. There were chick peas, red beans, clear noodles and green noodles. There was a separate bag of sweet white coconut milk. Be warned: these desserts are very sweet, I think my teeth wanted a clean brushover afterwards as it was too much for my them. >_<" 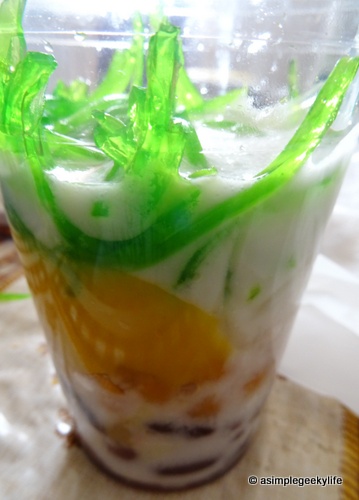 Total cost came to £11.50 although I calculated it to be £11.70 as the blackboard stated the dessert was an extra 20 pence from its original price. Nevermind, didn’t want to argue. It’s cheap, and I enjoyed the food.
My geeky rating: 5/5
Good points:
– Cheap food!
– Ingredients separated from the soup and there’s lots of ingredients included!
– Love the rolls
– Polite service
– There are small seating areas in case you have nowhere else to eat
Bad points:
– Had to wait a while for the food as there’s only one person serving and cooking (at that time)
Address: 4 Hampton Street, London SE1 6SN
Tel: 07832 999573 or 07776 508 125
Opening times: Tuesday to Sunday 12pm to 2pm and 5pm to 9pm