After spending a bit of time with Miss Pinky and co, I was dumped and sent home (Miss Pinky had planned a dinner date with Mr Picky – so I hope that went well)… but I was huuuungry (the white wine spritzer earlier didn’t help). So I decided to go to La Luna on the Walworth Road, an Italian restaurant that’s been around for years. And yes, this is the first time I’ve been in there… ¬_¬” Quite embarrassing to not go into the local Italian… Bad Geek! There are days when I pass by and it’s not busy and some other days it’s very busy.

So I sat by the window, it was a bit chilly that evening so I still had my scarf on… I went through the menu and was thinking to have either a pasta or a pizza. Choosing Italian food is always hard for me. I like both pasta and pizza, everything has cheese on it… fattening cheese! But the one thing I like the most is the Italian tomato sauce. Yummy!! 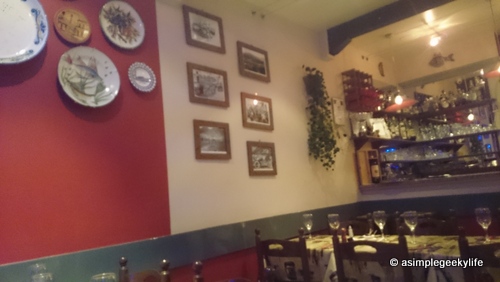 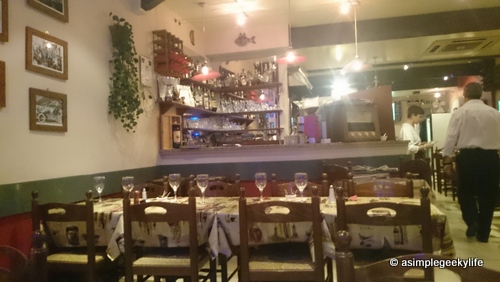 And this is what I had. From the hot starters I had the uova al forno which consists of eggs, ham, meat sauce and cheese… it came out nice and hot. Fresh from the oven. Be careful of the hot bowl!! I had to blow the food on every bite I took. It was very good, but not cheesy enough for me… I want more of that tomatoey meat sauce – just rich and sweet. 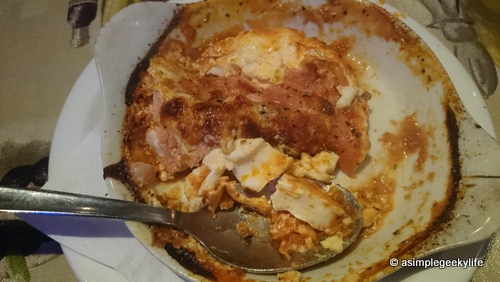 I also had the ortolana pizza. It wasn’t what I expected. The pizza was very big but it wasn’t cut into slices like I normally would get in other pizza places. Sometimes I wonder at how Italians eat pizza and apparently you cut it into quarters and eat it with knife and fork or you can pick up the quarters, fold it and eat it. But did I do that? Nope, I cut mine into 8ths and ate it slice by slice, plus folding like an Italian. I learnt the folding technique from watching an old American film with an Italian girl showing a person how to eat pizza slices… still remember that scene but forgot the film title!
I was a little disappointed with the veggie toppings… I wanted a little more on top. It was a good pizza though.

By the way, I did have a large glass of red wine, which made me a little tipsy, heheh, but I managed to get home in the freezing cold, and also felt guilty eating a lot whilst there was a homeless guy begging outside (I gave him a quid)… 😦

I was told by a friend who goes to this restaurant all the time, but is out of the country at the moment, to try out the penne all’amatriciana…. I wonder why!

Good points:
– Very polite service
– Reasonable prices
– Food comes out hoooot! (unlike some places I’ve been to) ^_^
– A lot of the locals go here which means it’s a good thing

Bad: points:
– Pizza toppings was not what I expected but everything else was ok!