Sorry for the wait for Day 3 in Marseille! Busy catching up at work and I didn’t pre-write any of these entries like I ususally do. 😦 But now I have a 4 day weekend! ^_^
The night before Mr and Mrs Travels were telling me about which towns to visit in Marseille, there’s loads of small towns that are pretty famous and I’ve never been to them yet. So I planned my week ahead…
First town to visit was a town called Arles. Straight after the school with the girls, Mrs Travels and I went to the train station in Port de Bouc and bought the tickets from the ticket office since the machine was broken (I forgot the price but it was less than €30 (~£23)). My train wasn’t till after 10am, so I had a coffee or was it tea? (which I shouldn’t have had). So from Port de Bouc, I stopped off at Miramas… then I had to wait for the next train was more than an hours wait AND the loo was out of order… should have went on the train’s loo. 😦 Poor me. Had to hold it for a while. Next train came after 12pm and the journey was another 15 minutes… the loo on the train was out of order it seems. Noooo!!! But thankfully I found a loo on arrival. Phew. 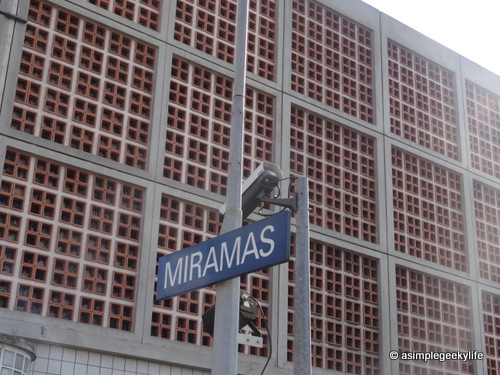 It was a very, very windy day. I think this is the first time I have had to battle the weather in Marseille! Well, off I walked, turned left out from the station and followed the signs that said Centre Ville (meaning: village centre), and informed Mrs Travels I arrived. It was a short walk – about a 10-15 minutes depending on your speed.., but a cold walk…

Here I arrived at the town centre. I think these were once entrance gates in the town. What happened in the Roman period?
Yes, Romans once ruled this town! I felt like I was Van Gogh, just arriving in town and exploring the streets and places to take pictures (or in his case paintings) of. I’m sure many tourists have felt the same! 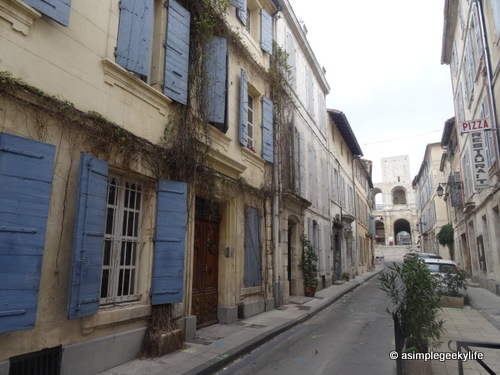 Then I saw the famous Roman Amphitheater which still stands here in Arles. I wonder what type of tournaments they used to watch… The cost of a ticket to enter into the site is €8  (~£6), but you can pay €15 (~£11-12) to see some other museums in the area. I opted for the €8 as I anticipated to eat later and maybe buy other things. Can’t spend all my money all at once!

As usual I took a lot of pictures, enjoy for the next few scrolls!

I actually met two Welsh women in the amphitheater and got talking to one (Mr Travels was questioning whether they were actually men… nope, definitely women). Well, they had been in Marseille for a week and said the weather had just turned cold, and had travelled down via Eurostar which is mega expensive than the plane! Train should be cheaper right? No air fuel is used! Anyway, I think the lady I was talking to wanted to talk more… And I actually just wanted to walk around… ¬_¬”” pardon (in French)… 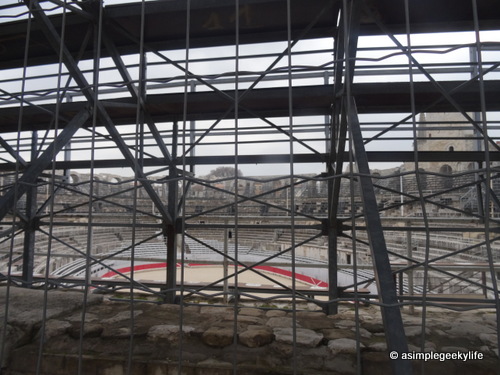 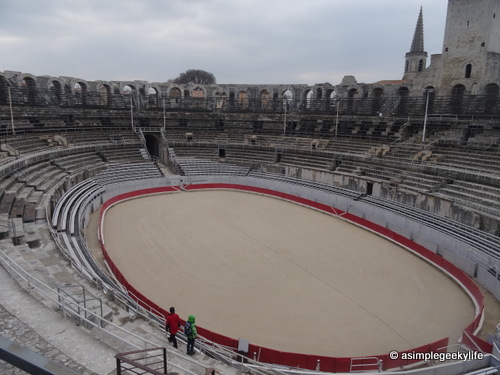 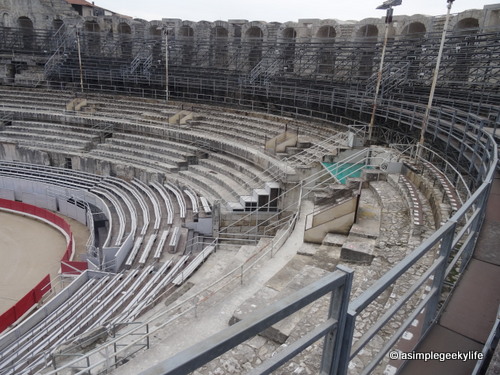 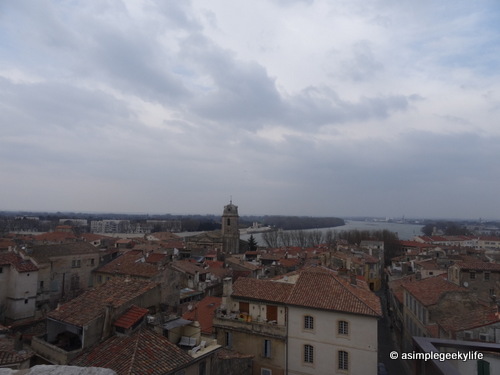 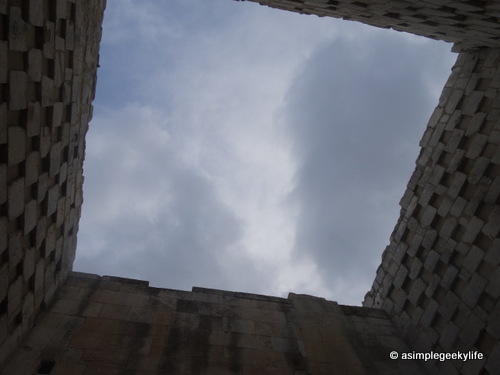 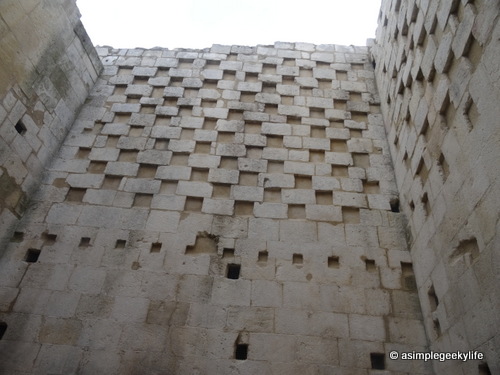 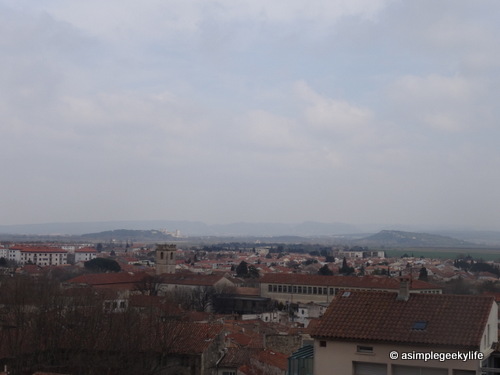 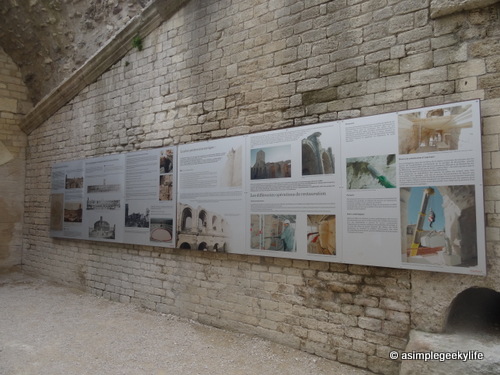 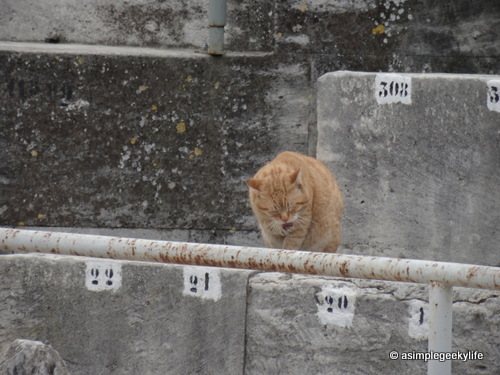 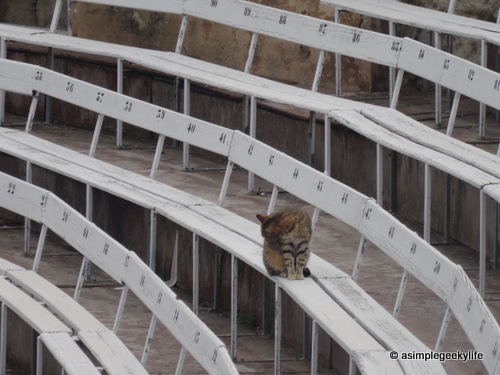 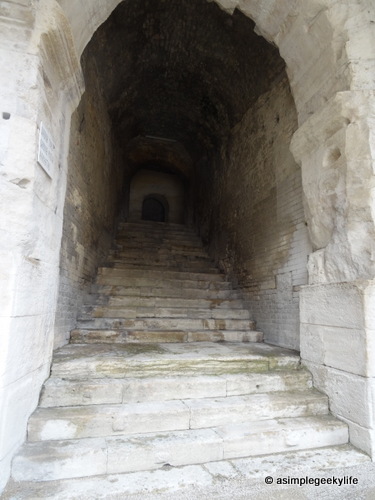 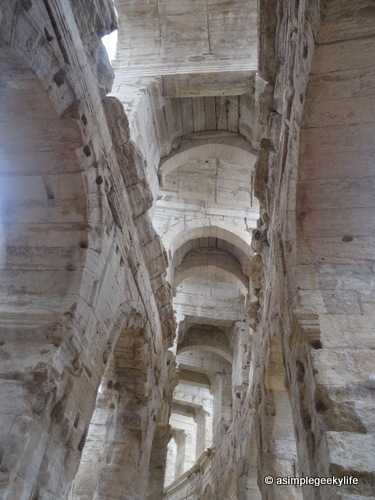 At this point I left in search for food! It was an exciting trip up and  down these ruins. I bet the Romans and French back then had long legs because those steps are quite high! 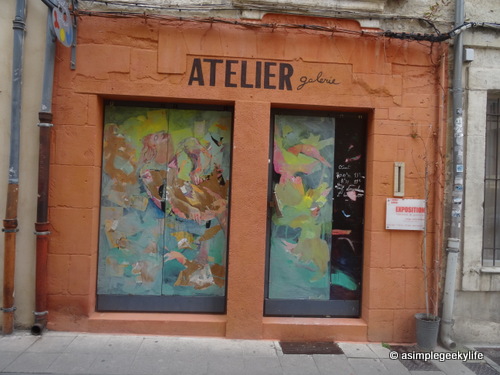 Finally walking up and down in search of something to eat, I decided on this place called Restaurant L’Escaldou. I read the menu briefly and saw that snails were being served. ^_^ Yay! Snails! I actually watched a Japanese cooking drama about a Royal chef who went to France and cooked a lot of French food. Snails was one of them.

There were hardly any customers that afternoon, just an old couple who was there before me, Mr Travels explained that Mondays is like a day off for most places… so it was empty, plus I think the restaurant was about to close for that afternoon before preparing for the evening customers. 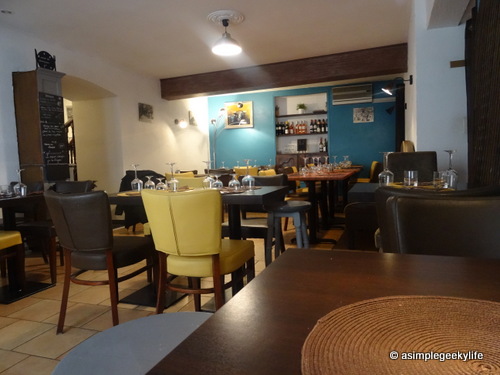 I ordered the set menu which cost €25 (~£19), so you get a starter, a main and a dessert, plus a drink of your choice. It was a lot!! So as well as the snails, I had the lamb chop set with a red house wine and a chocolate mousse for dessert… 😀 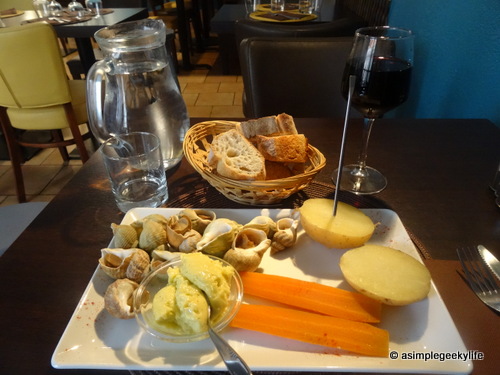 Some of the snails had some grit inside which was unfortunate, but they went well with the sauce provided.

Had a lot on this plate, but I ate it all! The chips were sweet, the veggies were ok, I took the fat off the lamb and that was cooked medium. Good stuff!!

Gosh the chocolate mousse was a delight!!

Next, after a full stomach, it was time to go around again… 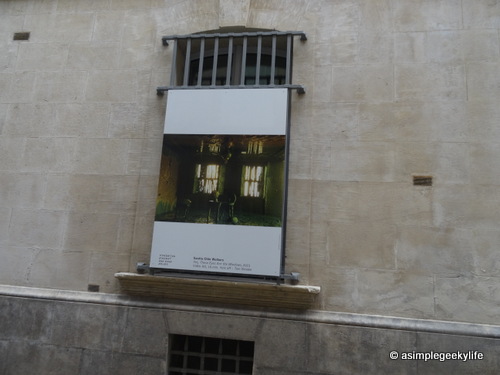 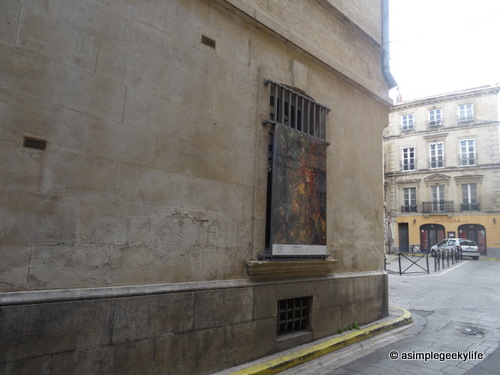 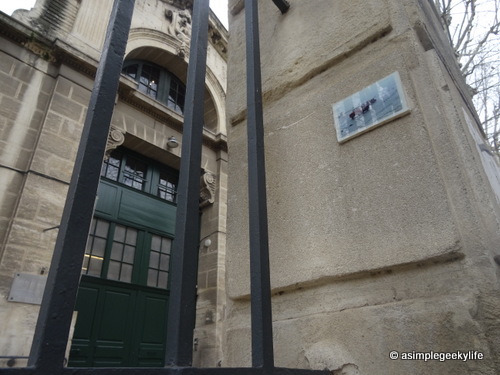 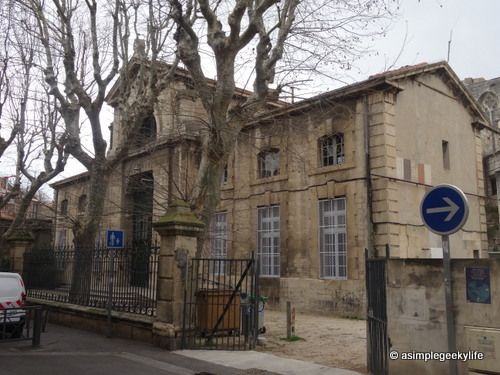 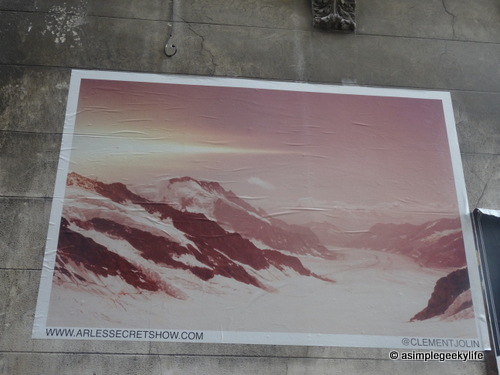 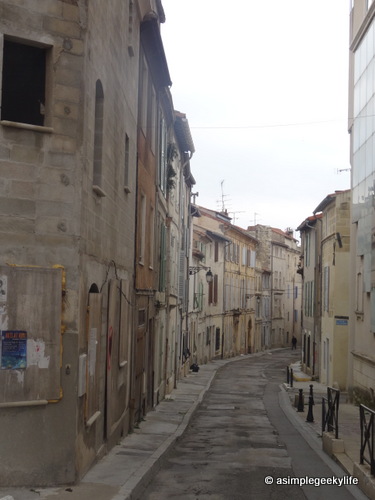 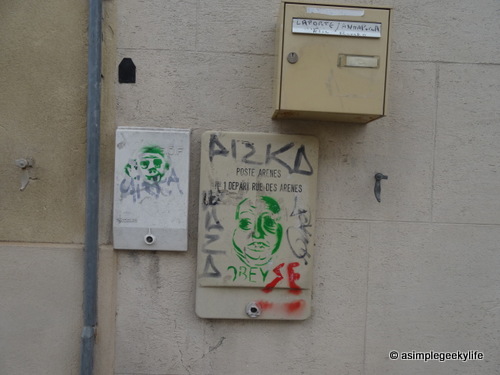 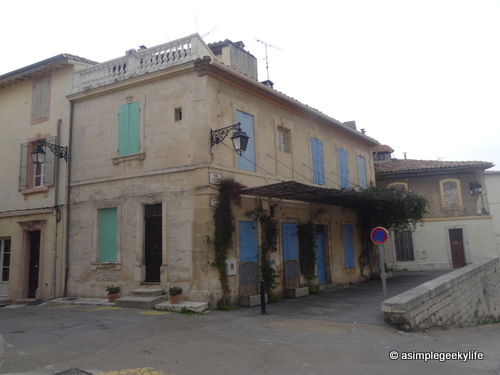 I decided to walk back towards the station as it was too cold, but I saw the seafront and wandered around there… OMG I don’t think I should have gone there as the wind started blasting about, I felt like I was going to be blown away!! My pictures look as if all was ok, but boy was it windy. 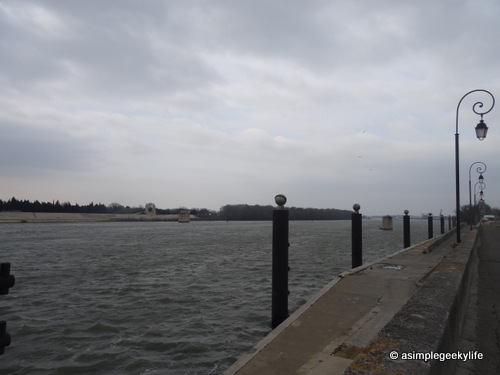 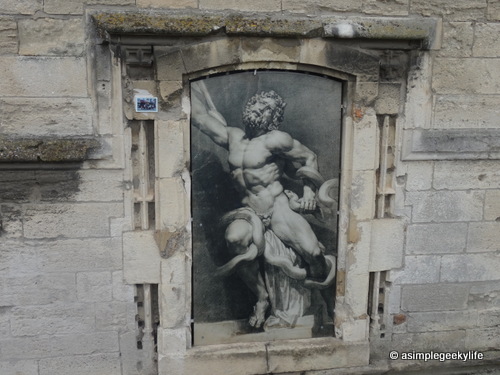 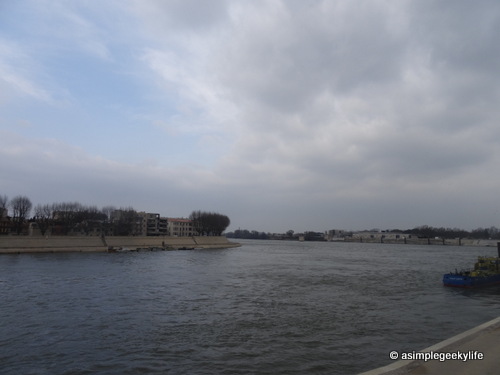 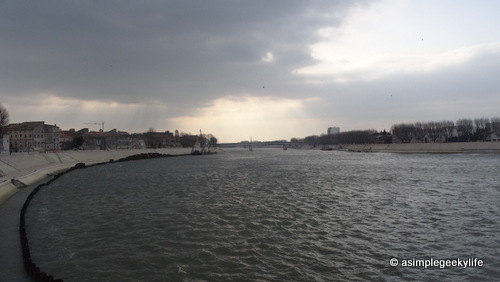 I walked back the other way, and went to this structure… I went up but unfortunately it has a lot of graffiti. I don’t think the kids in France respect old remains like these. So sad.
This was once a bridge called Pont des Lions built in 1868 but destroyed in 1944 during the Second World War. The lions were restored in 2008 it seems, but it’s too bad the bridge hasn’t been rebuilt as the next bridge is about 2 miles away.

Thankfully these ruins are next to the train station, I needed to feel the warmth, so I went and sat there for about 2 hours till my train came… but apparently I could have taken an earlier train! Oh!! I didn’t know that… but there was a crazy drunk woman who I didn’t want to be on the train with, so I sat and waited for the next one to come.
I was so cold when I got back to Miramas Station and waiting for the next train back to Port de Bouc. Next time I’m going to Marseille in the summer!!! No way am I going back in February. :p
Thankfully Mrs Travels left me some food. How I needed this!!!!!!!!!!!!!!

I had a good nights sleep I think.