Straight after the wedding (and before the BABYMETAL concert), it was another weekend away in Wales. This time there was no mountain climbing (hoorah), just a relaxing time there and back. Easter just happened to be on my birthday weekend… and to me this was a great way to celebrate! Out in the countryside and wilderness. ^_^
Thankfully Miss Pinky’s family gave me a lift home the night before, otherwise I don’t think I would have had a good night’s sleep… but in the end I did wake up early to eat breakfast and do last minute packing.
Started heading out to Waterloo to meet the others before 10am, but amazingly I bumped into Mr Games and Mr Sensible on the same bus! Hahahah. What a coincidence. ^_^ Then we saw Miss Money buy her breakfast from McDonald’s… We headed to the car rental and they gave us an orange jeep, unfortunately one of the tyres had an air pressure problem so we had to change cars. 😦 It was a nice jeep, but the other car had a bit more leg room. Oh well. Maybe next time.
The weekend was set for rain, rain and more rain. So we drove in the rain.

Miss Money said she was getting cold and didn’t bring a scarf or extra clothes. Didn’t she know it was going to rain? Yes, she did! Luckily I brought some yarn, which I was going to use to make Mrs Hen a bag for her birthday soon, but instead used the rest of it to make a short scarf… this was just the start of it after a 4 hour drive… tired!! 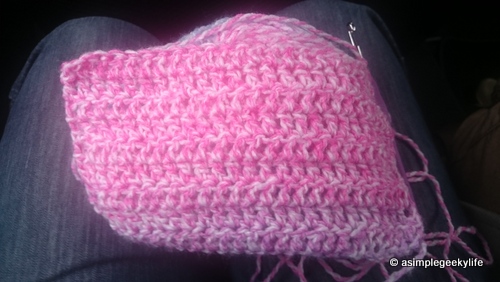 We were quite lucky that weekend as Mr Sensible’s grandparents own a caravan in a place called Grondre and there’s a caravan site there for holidaymakers… Took pictures of the bedrooms, they’re quite spacious for a large caravan we were in… The size of a small flat. 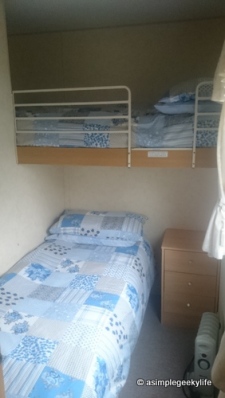 This was in the bathroom…

I think we were greeted with ok weather, the rain subsided and it was a little sunny that evening… Sheep were also nearby. Baaaaaa. 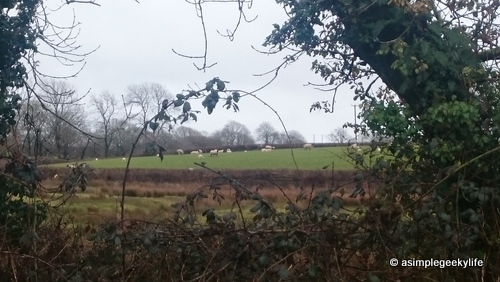 After resting a tiny bit we went out to eat and well, did a tiny exploration of the camp plus do some supermarket shopping in a not so nearby supermarket. Mr Sensible drove the wrong way. ¬_¬”” 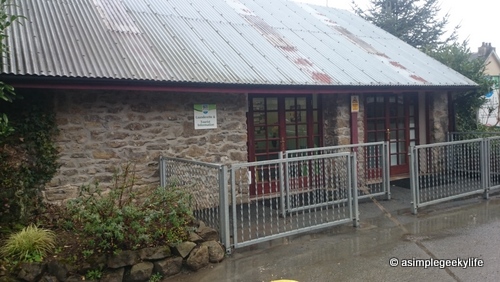 Thankfully Nisa Extra was still opened… because it was Easter weekend we were expecting the shops to close quite early. After shopping for the necessaries we headed back to unleash ourselves!

Here’s what a caravan site looks like from the middle of a road. 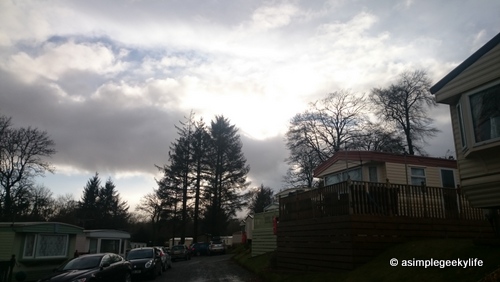 Now it was time to eat!! We went into the pub which is part of the holiday camp site. It seemed quiet for a Saturday, I guess people were avoiding the weather and cooking in their caravans… this was the food we had, none of us shared our food except the chips…

Mr Games had a pizza… It looks good… even the picture gives it a good honest look.

Miss Money had this Hawaii burger which looked a bit dry…

Mr Sensible had the steak and is currently on a low carb, gluten free diet… Don’t think he needs to go on a diet. He doesn’t need it!!!! :p

I stacked on protein and carbs. Not sure why I wanted a mixed grill… quite thankful it wasn’t too much, and at a reasonable price… (somehow I got a discount too). ^___^

After a loooong day, it was cold in the caravan (the heating was turned up high), we sat on the couch watching TV, knitting and teaching Miss Money to crochet. Hehehe. We became a crochet and knitting club!

It was time to go to bed around midnight… Goodnight… zzzzzz