My 700th post!! Woooow!!
Day 2
It was Easter Sunday, and I had a good nights sleep, we all seemed to have awakened at the same time although we all lost one hours sleep as the clocks went forward. 😦
I checked out the shower… it’s a dodgy caravan shower as you have to keep turning the knobs to get the right sort of heat otherwise it’s too cold. ¬_¬” Well the shower woke me up for sure!
Did we eat breakfast? I don’t remember… but Mr Sensible made me a dodgy coffee that morning and I remembered Miss Money, Mr Sensible and I ended up knitting or crocheting for some part of the morning… And as you can see, Miss Money’s short scarf became longer. 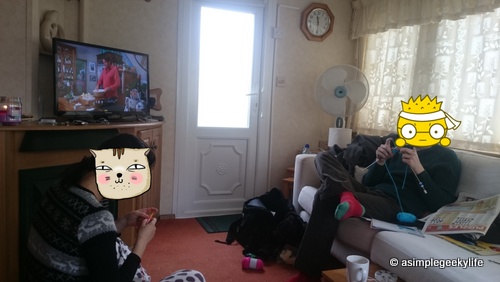 It was time to depart the caravan and explore a nearby town. We ended up in Saundersfoot. First stop was to find a parking space which we searched for a bit until a family drove off thankfully in a nearby parking lot… 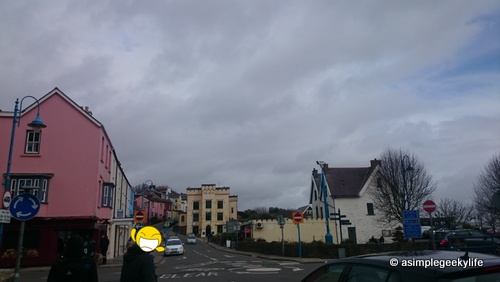 Next stop was a sweet shop… apologies for the picture but the lads and Miss Money kind of pointed it out and I think that’s why they went in…. ¬_¬””””

We walked around looking for things to do and ended up in a nearby amusement park. We didn’t play… 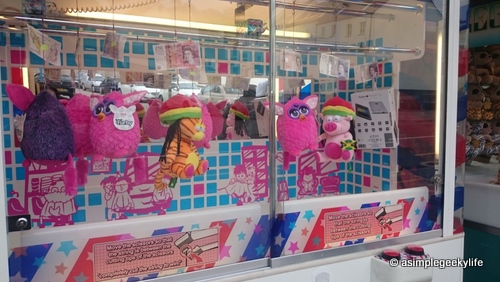 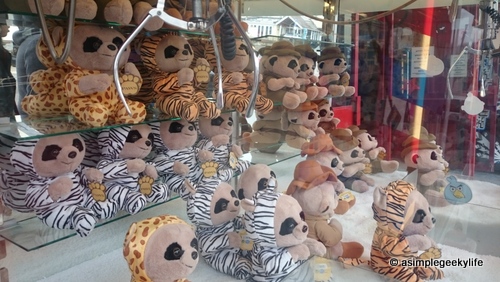 Seaside looked a bit busy although it was a little windy, good weather than London! 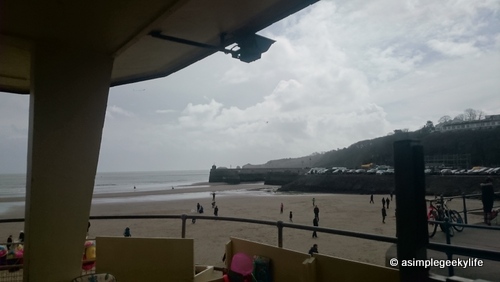 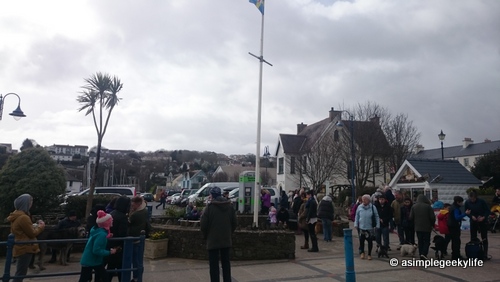 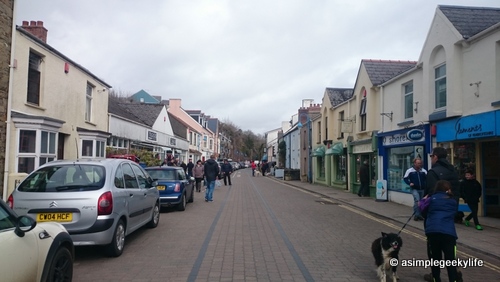 We were obviously a little hungry and tried to find somewhere to eat… ended up in a local pub called The Hean Castle. 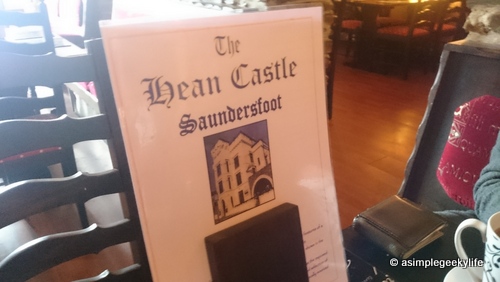 Mr Games ordered a hot chocolate… and he also decided to take a picture. LOL!! 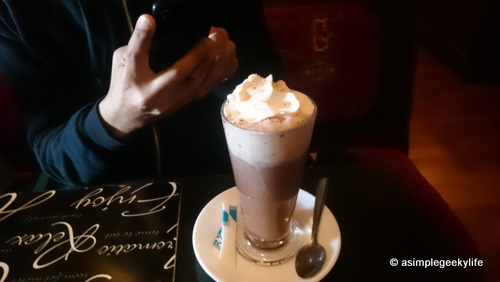 Mr Games also had the battered mushrooms for starters… 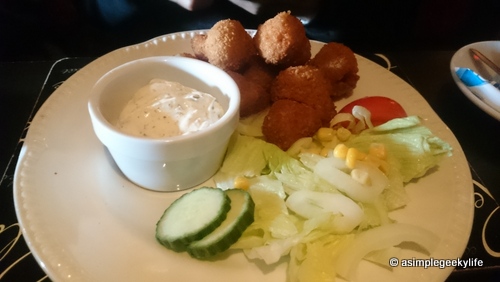 I think Mr Games had the lasagna. 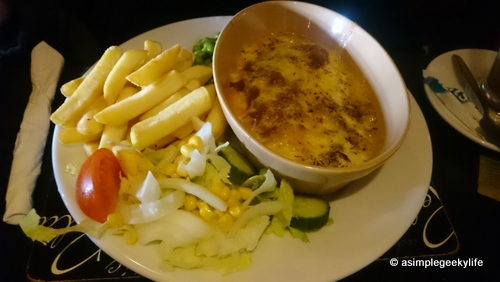 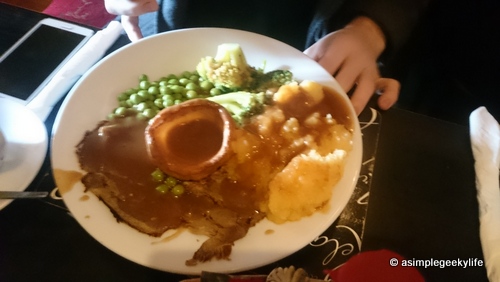 And I had the Guinness and Steak pie. Needed a bit of seasoning, but otherwise quite filling!! 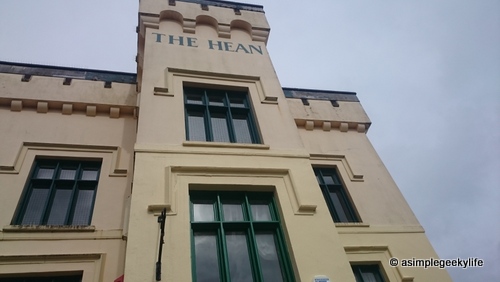 Next was a walk along the beach, still windy at this point… it was a short walk in the sand… 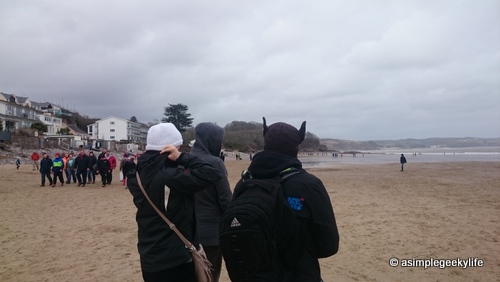 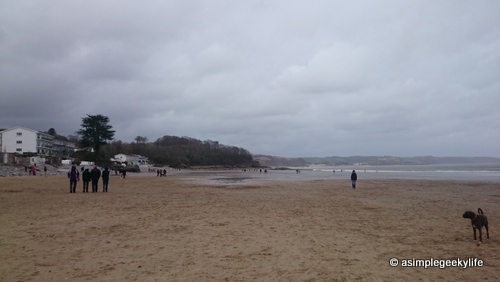 We ended in one of the local sweet shops (we went in there twice!) called Chobbles. Definition of “chobble” is when you bite down something hard with your teeth… Chobbles is a traditional sweet shop and only exists in Pembrokeshire, Wales. The sweets are reasonably priced. 100g for 99p! They must make a lot of money… even their chocolates looked incredibly cute. ^_^ 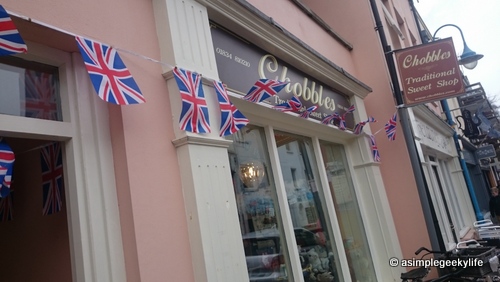 After getting a sugar high we walked around to see what else was opened… Miss Money had to pop to a loo so we ended up taking selfies. LOL! Can you see I’m wearing my new crochet hat. ^_^

After three hours in town, I can’t believe we spent three hours there, we returned back to the caravan… Mr Sensible said he was exhausted from driving so he took a nap… Mr Games also took a nap (he said half an hour but ended up sleeping for more than an hour). So Miss Money and I ended up watching TV with the subs on and I ended up playing Candy Crush (hey, I need to catch up. :p). It suddenly rained for about 10-15 minutes. Miss Money had suggested we go for a walk, luckily we didn’t go.
We were quite late going out for dinner, the local pub was filled with parents and children, so in the end we went into town. I couldn’t believe some of the shops were still opened on Easter Sunday!!

Mr Games and Mr Sensible ended up buying food from the local supermarket. Mr Games ate his sandwich or wrap before we got back into the car…
Miss Money and I went to the opposite kebab shop and bought food from there.
Here’s Mr Games playing hide and seek outside the kebab shop. Hahahahah. 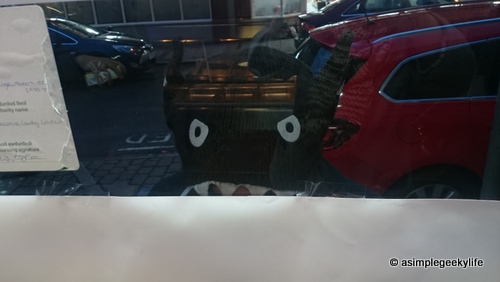 Guess who bought faggots for dinner… Did you know that faggot means gay and I believe it’s an old English slang word for a whore/prostitute, but I could be wrong there. 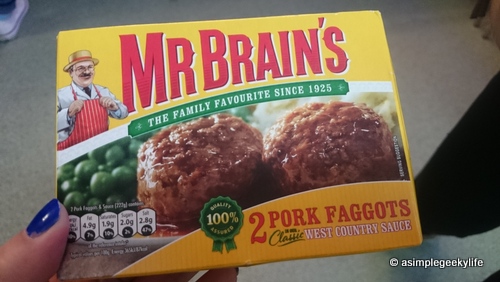 Mr Sensible had the faggots and added peas on the side. Well, he is Welsh. 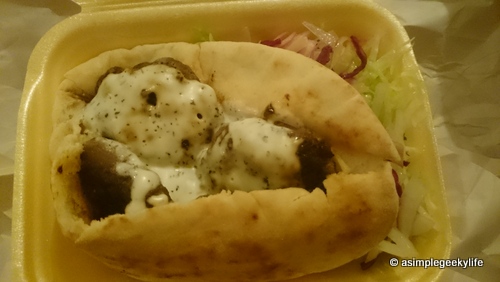 In the evening we ended up playing Uno, drinking lots of wine (I drank like a fish and started swearing >_<") and then we started playing charades (I hoped not to make a fool of myself whilst semi drunk).
So one of the slips was a TV show. Mr Games tried to act it out, but it was hard… in the end the show sounded like “Men-ty Floor”. Can you guess what the show is?
It was hard to sleep that evening. Storm Katie was pattering on the windows. I think we were quite lucky to have had the rain that evening. Apparently it was very bad in London. Should’ve slept on the couch…
End of Day 2.
***

On Easter Monday, we ended up leaving half an hour early when we originally said we would leave at 10am. Due to the weather Seven Bridges was closed for the morning… but thankfully it was opened when we almost got there. Miss Money was not happy that she couldn’t stay a bit longer… Thankfully we mostly cleared up the night before.
Bye bye caravan site!! 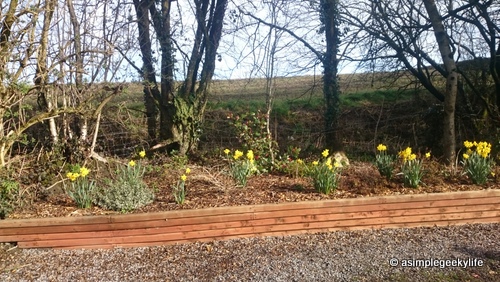 First pit stop there was nothing exciting there. Hi Minion, bye toys. 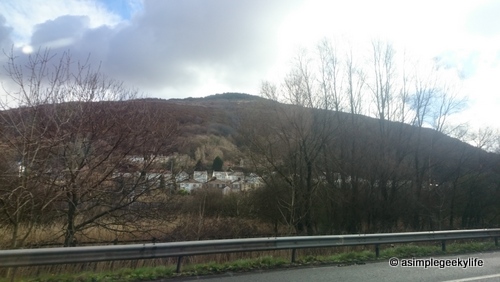 And I finally finished my 50g-ish ball of yarn which was supposed to make granny squares for Mrs Hen bag. The scarf is now a bit longer, so Miss Money better make good use of it!!!! 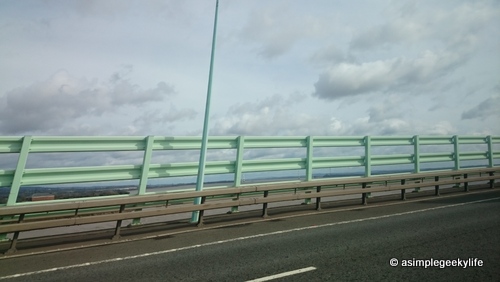 And now entered England. Hello there!

Finally ended our journey in Central London around 3pm, cleaned the car and returned the keys.
Such a lovely weekend away from the city, no mobile internet signal (in the caravan) and just having lots of ordinary fun like the things we would have done in the old days before mobile technology existed in our lives.