Friday 9th September – Early morning
Hoorah!! I went on a budget holiday!! This time I went on a short break with Miss Money. I know she’s not my usual travelling partner, but I have traveled with her before (before I even started writing this blog and traveled around with Miss Pinky), so we knew each others habits… and we generally get along well with each other… These posts are going to be split into several parts per day which is just to give me time to write something on each area as I didn’t pre-blog like I usually do during my trips… plus there’s too many pics!! ^_^
First stop was Waterloo Station at 4 something in the morning. Why? We weren’t getting a train to Stansted Airport. Instead we got the coach. Why? Because Miss Money is a cheapskate. ¬_¬” My god. Ok, I do agree that the train is expensive and for the same amount of time it gets there, coach was a better option for this budget holiday. Unfortunately I booked the coach quite late, so the prices increased quite suddenly. Paid £37 for a return ticket for two people (that’s £18.50 per person), when I could have paid £20. Nevermind. We learnt our lessons.
It took us an hour to get to Stansted Airport, which is all the way up in North London, not bad, because I thought we would get there in an hour and 20 minutes. There was hardly any traffic, which was a good thing… Might consider getting a coach next time to an airport.
We had already checked in online (and I had to do it because I could print the tickets :p). Thankfully we were seated together. It was practically a full flight. There was a big rush at security… so many people getting the early flights, plus I think a lot of people were late. Luckily Miss Money and I were very early.
First stop after security was Burger King. Ahem. May I point out that we were served fries, and wasn’t told that there were no mini hash browns. So disappointed!

After the disappointment, we walked around the airport looking for water, sweets and our gate… We had to get to gate 33 which meant we had to get the small train that took us to another part of the airport.

The queue was already underway, people were already boarding! 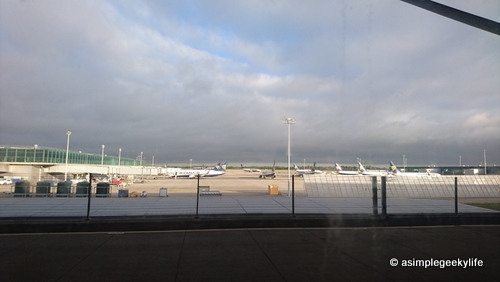 An hour later and we arrived on time in Cork. A wet Cork. And when you arrive early on Ryanair that stupid message comes on. I wish they could get rid of it. (I’m partially begging now). I did tell Miss Money that I didn’t like this airline because of the message, but she didn’t seem too bothered.

Take pictures Miss Money said! I couldn’t understand why she didn’t take any pics at the airport. :p

Once we were off it was time to find some information from the airport… How to get to Blarney Castle…!

p.s. It was Mr Stingy’s (my brother) birthday on this day… Happy Belated Birthday big bro. ^_^