Apart from experiencing the Spanish bakeries in Spain, thought I might as well try out this Spanish bakery on the Walworth Road (there’s a couple I think in Elephant and Castle – near the train station entrance). It’s been around for more than 6 months!
So this bakery replaced what was the bridal shop which is now next door, it was then converted into a shop for a fairly short while (guess that didn’t work out) then now this Panadeira (Bakery). 😀
I was out with MummyGeek, but had already a big bowl of beef brisket noodles and a plate of veggies to go with it… since I was passing, I thought I might as well top up with some Spanish goodies. 😋

I bought three items which I found interesting…

First was this beef ball. Wow it’s massive! Looks crispy on the outside… but what’s inside?

It was this amazing mix of salty beef, cheese and I think there were a few veggies… It was actually too salty and so I had to get a bit of ketchup to suit my palate. A bit oily but nice. I would go for it again!

Next was this corn bread… I thought it would be mega sweet, but it wasn’t. Tasted grainy. It had some sweetcorn pieces. Not sure what to think of this one really… I think I will need another go at this…

And lastly, which I took to work in the end the next day, is this hot dog bun… When cold the bread tasted slightly sweet and tough. So I don’t recommend eating this cold. It dried my throat badly… I placed this in the microwave for 30 seconds, and it actually tastes better when warm. Make sure you this one as a warm bread! 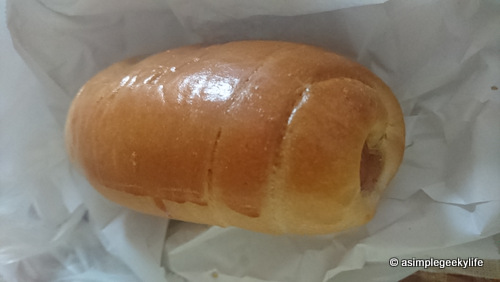 Overall a good experience! Total spent was £6 if I remember correctly…

Lots of Spanish speaking peeps were there on that Sunday I went… Wow.
Definitely not a big competition to the other bakeries as this one is quite unique.
The other bakeries on Walworth Road shouldn’t be too alarmed with this newish entry. ^_^

Just bought this from #kikiandmiumiu for £3.49. Bit expensive for a 250ml drink. It's a #hongkongstylemilktea. Not as strong as the ones in Hong Kong, coz they've added sugar to this cold version.
Late for work this morning! Overslept 😴 ... admiring the emptiness of where #ElephantandCastle shopping centre used to be.
Lunch from #StackSando #Vauxhall (Japanese sandwiches) ... Still full. Going to have a light dinner.
Landed in #Heathrow #Terminal5. The most hated airport in #London. 😆 Trying to spot home from this picture.
You think Heathrow Airport is rubbish? Well #HongKongAirport feels terrible food wise. There's nothing to eat at this hour apart from a Thai restaurant. You have to walk to gate 27 to find a non-decent sandwich and stale egg tarts. 😭😭😭
Compared to the UK, #hongkonginternationalairport is so quiet!