SURPRISE to my Australian colleague who will be leaving at the end of the year!
It’s 6 weeks (now 4… actually his contract ended, I hope he doesn’t work for free for the rest of the time he’s here) before he returns, but before that, some colleagues decided to throw a surprise dinner for him.

Was my Ozzie friend surprised? Yes he was! LOL. Trying to keep a secret from him was almost easy… Was actually looking at the menu at work when suddenly he burst into my office (I’m not going to miss that!).

I’m not sure how his friends chose this restaurant (although I think he would have liked a less fancy one… well I would have chosen a less fancy for him 😝), but we ended up going to a poshy restaurant – I’m sure Miss Posh, who’s still out there in the southern part of England freezing herself, would have been jealous… First off was the outdoor bar, where there were too many heaters, we were practically sunbathing in the cold. 😑 Drinks are fairly expensive… so choose a little wisely… 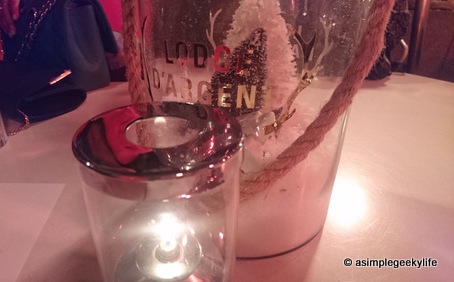 After surprising our Ozzie friend – he kind of high fived me because he was so ecstatically happy! 😅
We went to our tables quite late… and we also ended up looking at a completely different menu that was given to us! 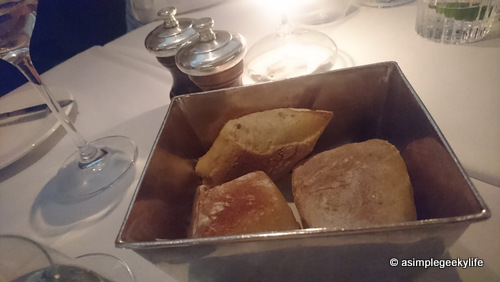 Ended up sharing a bottle of red wine (I actually wanted the glass of wine that would have suit the dinner I was going to have … 😞). But this was ok! Not really a wine drinker anyway.

First came out were the starters. I had this Tortellini a la truffle… Wow… If this was a main menu with that green sauce I would have been absolutely thrilled. I wish I had some more bread to scrape it all off. 😅 Now I know what truffle really tastes like. I’ve had truffle before but as truffle dust or stuffed into something. There was a light mushroom taste to it. Exquisite.

The other starters… Crabe (crab salad and Melba toast).

Saumon fumé… basically smoked salmon with Melba toast and something else.

Right. So in the beginning of this surprise party I was going to go all pescatarian… But in the end I became a carnivore. Food chains matter in this case. 😅 I ended up choosing the Chevreuill… haunch of wild roe deer… 😑… it was either this, rabbit, fish or go vegetarian… Hmm.
The slivers of deer meat tasted different to other meats. Smooth, chewy, almost like the texture of smoked salmon or fresh raw squid. Wonder if this will be the last time I’ll eat deer. Anyway this was a nice combo. Sauce and veggies were nice too. 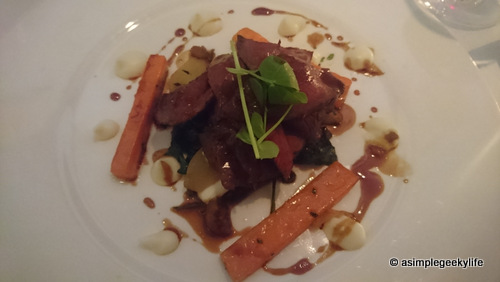 Other menus, Cuisse de lapin, the rabbit leg dish… Unfortunately the person eating this couldn’t eat after 10pm…no appetite… so it was practically untouched. 😦 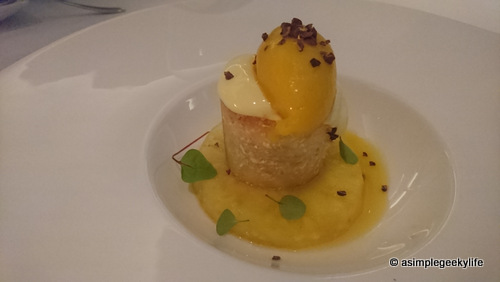 And for some reason I was given 5 of the same macarons when the menu said 6 flavoured macarons. I thought there would be at least 3 or 6 different flavours. How disappointing… I gave the last one to one of my ex-colleagues. Seemed like he was still hungry. 😆

I have no idea of what the total price came to… There were 19 of us… So predicting at least £1500-2000 😲 … well I can’t complain. My Ozzie friend paid for my side of the bill… Ah man! I did try and get it back it from him, and I wasn’t even allowed to take a peek of my bill… Predicting around £60-70 for what I had.
By the way, most of these colleagues of mine are on the high earning side… I’m a mere admin person who seems to like the high end stuff once in a while… ^_^
My geeky rating: 4.5/5 😑 (The Ozzie gave a 4/5 rating… I tried to explain I did some “Internet thing” – as he doesn’t know I blog! 😉 … he thought I gave ratings via Trip Advisor… 😅… Food was great but service was bleurgh).
Good points:
– Love my starters
– Reception and bar staff were great and accomodating
– Food was great
Bad points:
– Waiting staff were a bit on the harsh side (might be because of the French snobbery thing… guess I’m used to it)
– Disappointed I only had 5 macarons and for it to be only one flavour was ridiculous
Address: 1 Poultry, London EC2R 8EJ