I’ve been trying to find a better way of blogging, as in blogging on the go, but I also needed to find a way of bulk watermarking photos on the go too. Thankfully I found an Android app called “Add Watermark”, and so far it looks good!

Have you had a very expensive doughnut (donut for the Americans and Canadians) before? Nope neither have I, until a week ago when I was sent to a workshop/meeting during lunchtime around the Borough/London Bridge area.

After the workshop/meeting, I needed a bit of lunch, so I had chicken katsu curry in Wasabi… Afterwards I started heading back to the offices of where my colleagues sit, but ended entering Doughnut Time. 🤣

The first doughnut 🍩 I chose was the Hans Rolo (named after Hans Solo from Star Wars – haven’t watched the last film yet, so shush). It’s a massive doughnut. It will take you a lot of bites to get through this. The Rolos were a bit hard, so I think these were refrigerated beforehand. I wished there had been a custard filling inside. It would’ve tasted better.

Next up is the PB and J-Lo (peanut butter and jello). Typical American style. This doughnut was supposed to be for Mr Bear or myself if he didn’t accept it. Well, unfortunately, Mr Bear is on another diet AND his (and mine) colleagues banned him from eating sugary foods (although he ate a load of cupcakes and chocolate pretzels 🤣). The peanut butter was smooth and the jam was sweet, but it felt like a rough ride between the two flavours that was separate by the bread doughnut. Such a shame. 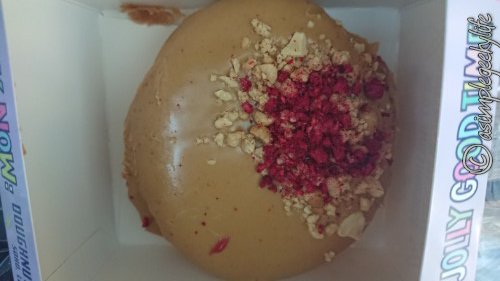 Total price came to £9.00. That’s right, 9 frigging pounds! It was worth trying out and this place would definitely break my bank balance if I went there daily. So only try the doughnuts one at a time peeps!