Oh, it’s been a long time since I’ve done a bento post.
Someone commented on my blog that I should make rice balls for my bento. I’m too lazy for that. ¬_¬” soooooo, I looked up Japanese rice ball fillings and ended up looking at this article about Japanese onigirazu おにぎらず… Wow a rice ball that was popular back in the  mid-1980’s from a Japanese manga “Cooking Papa” and has now made a comeback in Japan.
Sugoi! すごい！(Sorry, been watching a lot of Japanese dramas lately – trying to up my slang!). I had a look at some YouTube videos and came across one which I liked (will post this at the end).
This was my first try – Miss Vegan’s fried tofu which was smothered in soy sauce and some gem lettuce… Really don’t know what vegans like to eat, but fried tofu was top choice! She liked it but I think the rice was undercooked. Whoops! I did tell her before she ate it. 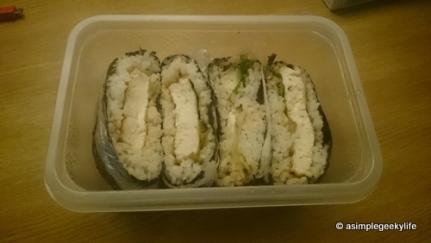 Mine was filled with lots of different ingredients… one had fried chicken pieces, kimchi, gem lettuce… and the other had tofu, kimchi and chicken. I put a lot of colour into mine… and I was stuffed! 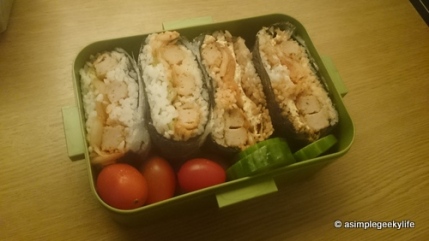 I hope to make a few more in the future… maybe add fried egg and spam. ^_^v

Here’s the video I was talking about…

Woah it’s been a long time since I’ve made some bento lunches. As I’ve said in previous posts I’ve just been either lazy or too busy.
So here’s some that I’ve made over the weeks and months…
These pics are all taken with my phone, so they are not the best of quality.
This first one is a healthy one of carrots, cucumber, and gherkins on top of a tuna pasta.

This is of some leftovers. Mushrooms, carrots and rice and I think there’s some celery in this one! Yuck! I hate celery!!!

Ah, unhealthy white bread and peanut butter… But at least I added some fruits to this lunch. ^_^

This bento box I bought from Longdan isn’t the greatest. The lid has loosened, so I had to use some ribbon to make sure it closed! ¬_¬ 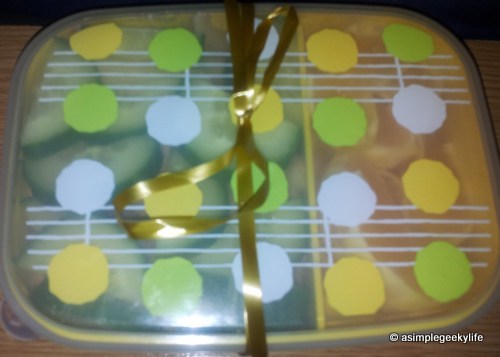 Here’s what was inside… Loads of cucumber, oranges and some tuna pasta again!! 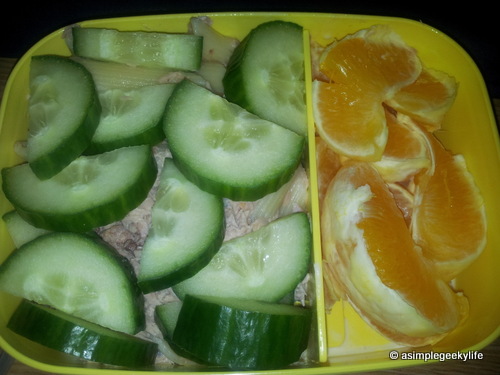 Ok, I had to make a very geeky bento for this blogpost, so in the end I made some pasta, and then fried an egg. Fried eggs don’t usually go into a bento, but I wanted it for lunch. Plus there was nothing in the fridge… ¬_¬”” 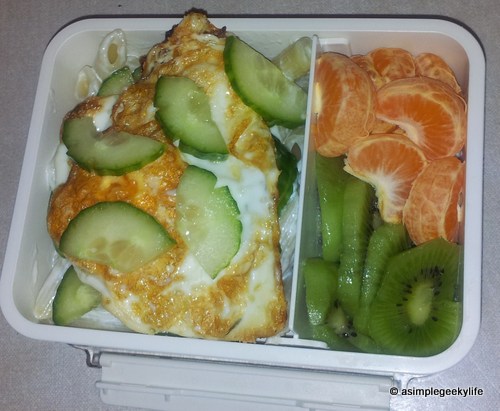 Last but not least is this bento with German salami with chilli cheese slices… and sliced apples doused with some lemon juice and a clementine! Nice for the Geek to eat!! ^_^ The chilli cheese was great too!! 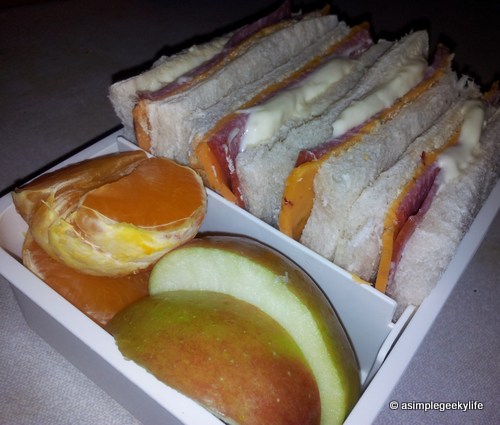 Any suggestions on what I should make next for a geeky bento???!!!
I have grown to love all things Asian (Chinese, Korean, Japanese – anything goes I guess). (^_^)v
I have been a fan of bento style lunches for a little while now. Assuming you all know what bento lunches are, if not, they are just Japanese style lunch boxes of leftover food from your dinner etc. But sometimes I start mine from scratch.

My craze for bento started off from watching a few mangas and Japanese school dramas and then seeing them on Hong Kong dramas… Hahahahaha… Geek!!! Anyway, a friend of mine from China had a pretty neat lunch box with 3 compartments – and I wanted one for myself! So I searched high and low for something similar – but only found small bento boxes, or ones without compartments but eventually I found one in London’s Japan Centre (but now broken and thrown away) and one in Hong Kong, which I knew I would use for a while ^^. Now, I have loads of lunch boxes (not intentional of course!). Some I have had to give away (they were too small) or thrown away (because they got broken after many uses!).

Well, I think it’s about time I show you some recent bento lunches I have made this year (not many here since I’ve been a bit lazy and doing all of that crazy studying!).

Some of these pictures were taken using my phone, so here’s a fishy salad to start off with in two different lunchboxes…

Yummy pasta salad in the lunchbox I bought from Hong Kong!! You can find a box similar to this in MUJI at the moment.

Here I used crustless bread for these sandwiches (I don’t like crust). And usually I leave the skin on my tangerines, but the skin easily came off on these ones…

Now I’m going to show off my culinary skills, (plus the use of my Olympus EPL-1 which gives these nice shots)…

And here I made another 2 for some friends. The one of the left is in a re-usable takeaway container. The black bento box I got from MUJI, which they don’t sell anymore.

After making these, I ate the leftovers, yum yum!!^^

I will make some more bento style lunches in the future, so watch out for more posts of these!! ^^

Here’s a couple of websites you may want to read which are dedicated to bento lunches:
http://justbento.com/
http://www.aibento.net/

Essential travel today to Central London today... fairly quiet outside. China town is empty but supermarkets are still opened. Some of us can cook Chinese food instead. Eat rice and noodles instead of pasta. Use soy sauce instead of salt. Buy frozen foods if you can. Try other things!
Short stories from #SNCF. Care for a short read?
American food before we board the train... Have an hour to wait.
Earl Grey tea break.
Last minute walk around Paris!
So tiiiired! Drank some juice and stared a ceiling in a shopping centre... (final dinner was courgettes in cheese sauce). 😒