Well, it’s about time I went to Love Walk Cafe. I’ve heard and read different views on this place and most of my colleagues praise it.
So straight after a meeting (and after my first work party at The Camberwell Arms) with slightly dreary eyes and hungry to try something different Miss Vegan and I went to buy things in Superdrugs then straight into Love Walk Cafe. It’s cash only and Miss Vegan forgot to get some cash, so I said I’ll treat her.

The place looks a bit daunting inside with pipes showing and bear walls but other than that it looks kind of a natural place to be in. A natural looking cafe. 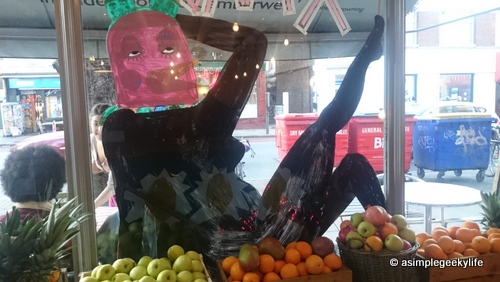 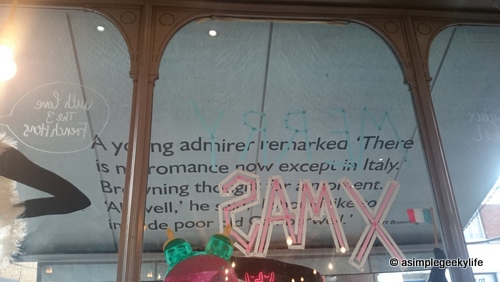 Looking at the menu board there wasn’t much that I wanted so we asked if there was a separate food menu… yes there is! Quite a bit of choice.

We stood there waiting for a while, drinks became ready… Miss Vegan had the hot chocolate with soy milk.

And I had a go at the Love Hangover smoothie consisting of spinach, mint mango and apple. Very green. Very healthy looking. Didn’t have a hangover but thought I should try it out!

We both ordered burgers but unfortunately it took a long time… In fact they were given to the wrong person. 😦 So one of the waiters went running to retrieve them back… It was also unfortunate that one of the burgers already had ketchup in it, so they had to change the chips. 😦 Hmmmm… maybe the waitress should have checked whose orders they were before giving them away… such a palava!! That’s already given me a bad impression of this place.
Well burgers sorted, a free pastry given (which I had) and a short walk back to the offices it was time to eat!
Blimey the burgers look big… Didn’t look as if it was anything special. I had the Jerk chicken burger that had a piece of pineapple in it. It actually didn’t taste bad. With jerk chicken I always worry about if it’s spicy enough. I think (from what I remember) is mainly the pineapple rather than the spice. Chips were ok, but went cold after our longish wait. 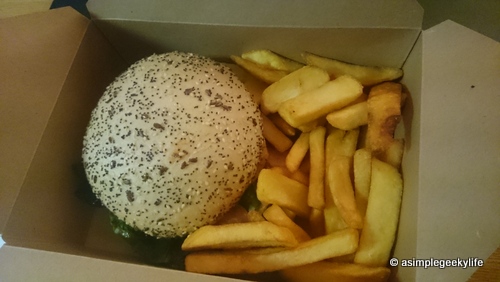 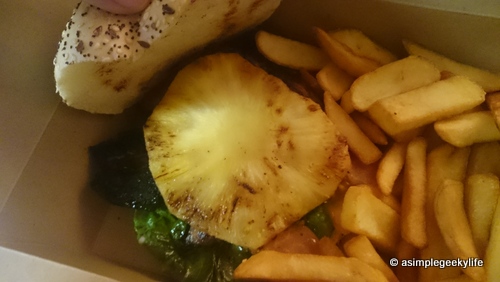 Miss Vegan had the Quinoa burger. She thought it was queer to see a quinoa as a burger but surprisingly it does work… I had a bit of taste of it, and Miss Vegan said it does work but needs something to finish it off. It’s kind of dry-ish towards the end of the taste… It needs a sort of sauce to make it a little wet and agreeable to the palate. 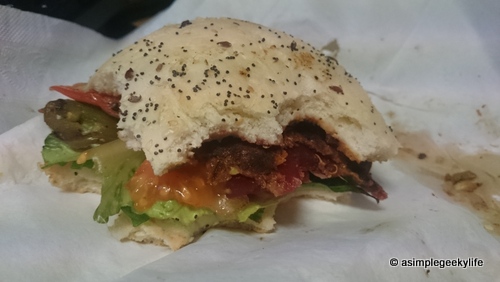 Well, total cost came to around £21. Expensive for cafe food methinks!
Miss Vegan tells me the soup is the best part of the cafe… I guess I have to try it when I can.
My geeky rating: 4.5/5
Good points:
– Polite service
– Burgers are big
– Smoothies are cool
– Apparently the soups are fantastic too (according to Miss Vegan)
Bad points:
– Cash only plus a little expensive
– Check orders before giving them out to the right customer
– Longish wait
Address: 81 Denmark Hill, Camberwell, London SE5 8RS
Tel: 020 77039898
http://www.lovewalkcafe.co.uk/filestorage/downloads/fulham_menu_29.07.2013.pdf
Lunch time (on a Friday afternoon)!! Where do you go to lunch in Camberwell?!
Well, this place called Brunchies which is located opposite to Nando’s and almost hiding itself from Coldharbour Lane and Denmark Hill, is somewhere where I have wanted to dine for a while. I’m quite surprised not many food bloggers who live in South London have not blogged about this place. Maybe they want to keep this place a secret for non-locals.
Brunchies is a cross between a deli, café sandwich bar and restaurant. It’s been opened for a few years, and a lot of locals seem to love this place. It was very popular at lunch time, and it seemed the waitresses were about to collapse with tiredness! The place is styled like an American diner which is what probably appeals to the customers. I believe the breakfasts are served all day hence the name Brunchies. 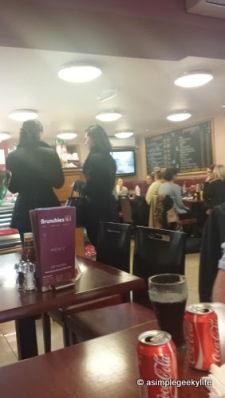 I went with a few colleagues Mr Bear, Ms Pâtissier and a different colleague who I will call Mr Fanatic as he becomes enthusiastic for many reasons or for no reason at all.
I had already looked at the menu before we got there, so I already knew what I wanted. The others had to have a long glance (I think the waitress wanted us to order quickly – but she was really fun!). Mr Fanatic was laughing at the menu for a little bit as he spotted a mistake on the menu (which you can find on the website menu too). Oh well. Only Mr Fanatic would have spotted that… However on Brunchies’ website, there is another spelling mistake…
Nevermind about the menu, lets see the food!
I ordered a Cool Melon Smoothie. My impression was that it was going to be a green-whitish one (I forgot to read the ingredients), but no it was a watermelon type colour with blueberries and grape. I actually liked it.

At first I had trouble deciding what to eat as there’s a lot of choice, but in the end I chose the Brunch Tower, which consists of a chicken burger, a hash brown and salad. I couldn’t taste the mayonnaise in my burger, so it was a bit dry unfortunately. The chips were nice and hot too. 🙂

All three of my colleagues ordered the Texan Burger. Woah! ¬,¬”” What appealed them to order the same thing? Is it because of the amount that was in the burger? Anyway, it looked massive, and I was thinking I chose the wrong item. Theirs look so big… ¬,¬”” I had a taste of Ms Pâtissier’s as she couldn’t finish it. The beef was so meaty, and the halloumi cheese tasted so good. But there were too many bacon bits. Mr Bear didn’t enjoy it as much, maybe because of the beef burger or the bun, (he likes McDonald’s more). Mr Fanatic finished his plate… he knows how to eat!!
I think the total price came to about £27 (it wasn’t written on the receipt, as you have to take it to the till area to pay), but Mr Fanatic said he would pay for us, so I don’t know the total of it all. Thanks Mr Fanatic!!
My geeky rating: 4/5
Good points:
– A very busy local deli bar (definitely one of the most popular places to eat in Camberwell)
– Cheap food for breakfast and lunch (there are different prices for eating in and out)
– Burgers are big (although quality wise, it is not the greatest I’ve ever tasted)
– Friendly service
Bad points:
– Just the spelling mistakes on the website and menu