Oh for goodness sake, I failed my driving test for the fourth time. Pedestrians, if you see an learners car near a test centre, please don’t walk in front of them. They could be doing their test. Just one silly fault that’s cost me. Grrrrrrr.

After two heavy long days of walking around Tokyo, I decided to keep things light for this day. I finally received a message from the reception desk that my package for my JR Pass arrived, so I where to the desk first before breakfast.

This time I had a lighter breakfast. Normally in London I would hardly eat breakfast this big in the morning, but it seems my appetite got bigger after arriving in Japan. ^_^

They made some special mochi for this day (and the day before, they made a fluffy cake). Yummy. Inside was some sweet red beans. Umai! 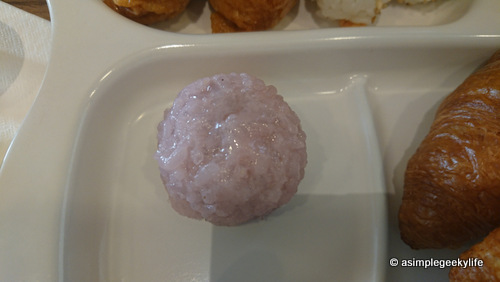 Because I think the coffee cups are particularly small for breakfast, I had bought some DIY drip coffee sachets from the convenient store the day before. So I actually drank some decent coffee… with some mini Kit Kat’s.

Question to Nestlé: Why can’t we have decent Kit Kat flavours in the UK? Or innovative Kit Kat ideas like the Japanese in the UK?

I guess I’m a big Kit Kat fan (see previous posts on this blog). I haven’t checked out the recent flavours here in the UK because unfortunately our local tuck shop/newsagents is closed down – not even sure why… Maybe they’re planning to knock the building down.

So these two Kit Kat sizes in Japan are genuinely new. The first one here is the Ruby Chocolate flavour. What is Ruby chocolate anyway? There wasn’t much, so I ate them all. ¬_¬””

And this one is the Milk Chocolate flavour. I think I liked the Ruby one. It was much sweeter than this one.

Ikebukuro is in the north west of Central Tokyo, it’s a bit out of the centre, but so easy to get to take the Yamanote Line using your JR Pass/Suica/Pasmo card – whatever you’ve got. A lot of Japanese flock here, not sure why, maybe because of the small shopping area. It’s like a smaller version of Akihabara.

As it was before 10am, I had to walk fairly slowly before the shops weren’t opened. Most of the shops in Japan don’t open until 10am or possibly 11am. I think it’s because they open till late – and possibly for workers to avoid coming in during rush hour, which is usually between 7am and roughly around 10am (or earlier).

First shop I went into was Tokyo Hands, which is like a department store with many floors. I liked all the things there, especially the bags and stationery, but I honestly resisted as I had spent so much on stationery in China last year, there was no point in me spending on anymore. Hehehehe. So I only bought food-related things such as a chopstick case and a food bag. I really needed those as the MUJI in London don’t supply the sizes I want, and they don’t sell drawstring bento bags anymore! 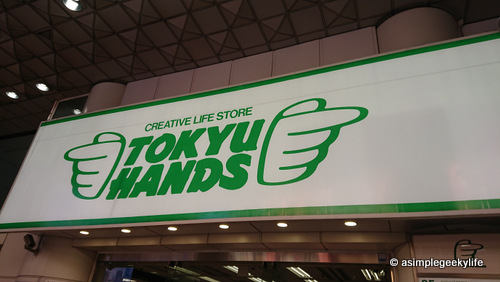 I went into a few stores after this, like a secondhand bookstore, which is a few doors before Tokyo Hands. Ahhh, if only I can read Japanese fluently, I would have bought many books as they are so small. Sometimes I wished the UK could make their books more pocket sized. I know the font would be compromised but Japanese people seem to be able to manage it, (even Chinese people manage too).

Anyway, one reason I think people come to Ikebukuro is because of this SEGA store, I didn’t go in, but I think you can play arcade games there. 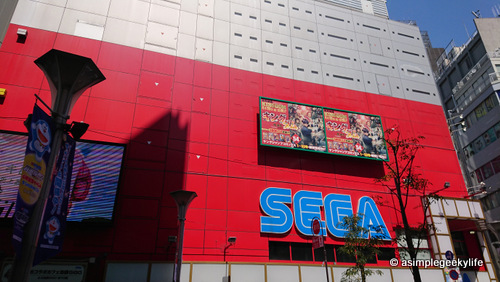 I think Uniqlo (pronounced uni-klo) was doing a Gundam special. I love the large figurines in the window. There was one episode or movie I had watched as a child and I really loved one of the songs, but I’ve forgotten which one it was… I’ll have to ask Mr Stingy. He’ll remember. (Edit before posting: I liked Macross Do You Remember Love, the Cantonese version, not Gundam! Thanks Mr Stingy!). 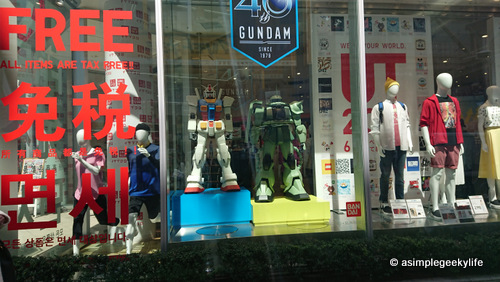 After this mini shopping spree, I actually walked down south – as in walked the other way from the hotel to see what other things were there… To be honest, there wasn’t much to see, just a few independent shops, some restaurants including a Coco Ichibanya and a small supermarket that I ventured into. I purchased my lunch in the supermarket, and walked slowly back the other way.

I ended up eating in the park behind the hotel.

Ah man, I really like Japanese fried food. I had a potato croquette and egg sandwich, lemon tea and freshly made skewers of fried pork and egg that wrapped around the pork. The skewers were very crunchy. Too loud for the park, but I ate them all in one sitting. ¬_¬”” They were amazingly tasty. 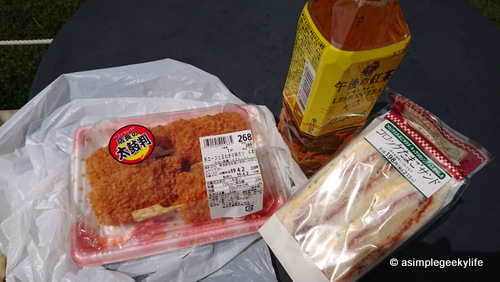 After lunch, I went around the back streets and then onto a main street. Shopped in the clothing section of MUJI. I bought a couple of skirts, which thankfully fit!

Then I headed back to the hotel room and had a long nap… zzzzzzz (my body said I needed it).

It was around 6pm or some time afterwards when I woke up. I really didn’t want to go out, but I needed to eat my dinner.

I passed this ramen bar a couple of times, and I thought I’ll try it. To translate, this place is called “Yokohama Family Ramen” 横浜家系ラーメン. 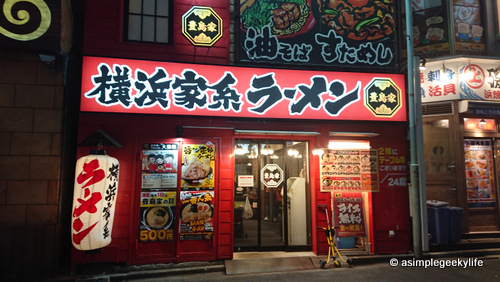 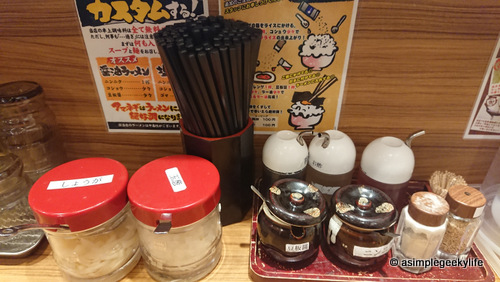 I decided to have the one with everything, medium bowl size. 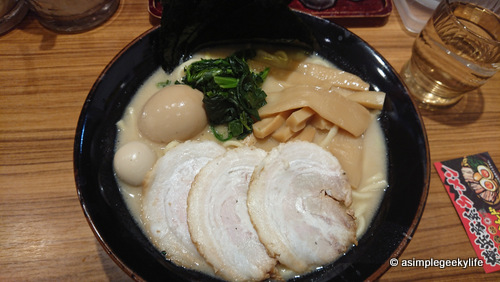 The ramen reminded me of the time Miss Pinky and I tried to finish that massive bowl of ramen that was filled with veggies. Heheheheh. Don’t worry, I finished this but didn’t finished the soup. A bit too salty.

Went back to the hotel with a few drinks and my breakfast for the next day. It was going to be an early start!

Edit: I did have two puddings before I went to bed! The cake ring was left for breakfast! 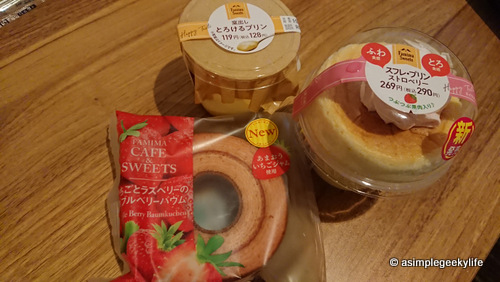 Back to sleep I go, heheheheh.