One day after picking up a package in Vauxhall that I had bought from John Lewis’s website, I decided to go and eat some Korean food. It was also Christmas Eve, and left 2 hours early from work – why not?! My work place at the time almost seemed quiet but could get away and leave the rest of the work for after Christmas. >_<" (I did not regret it at all!).
Do you remember Tiffany’s in Vauxhall? Probably not, as the Korean owner of this restaurant has changed it’s name to Jihwaja.
Wow. I haven’t been there for a while, but there was an absolute revamp of the menu, name of the restaurant and promotion of the tiny location. Amazing. 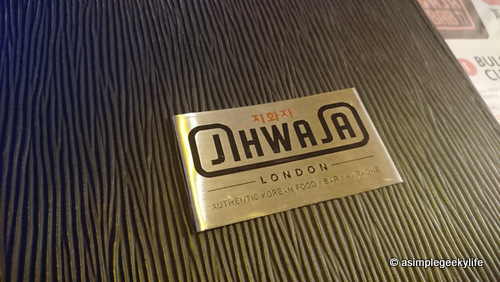 I sat in the same seat I was in last time. Looked at the menu and thought I want the lunch menu! Unfortunately it was already between 4 and 5, so had to make another choice. Couldn’t order the fried chicken because that was four two people – I think I could have ordered it and ate it… Maybe… 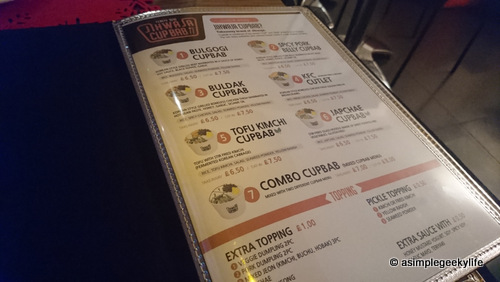 In the end I ordered the Buldak Spicy Chicken which came with some rice balls seasoned with sesame seeds and seaweed, and on the side was some salad. This was priced at £9.90. I also had a Hite beer. It was Christmas Eve. I needed it. 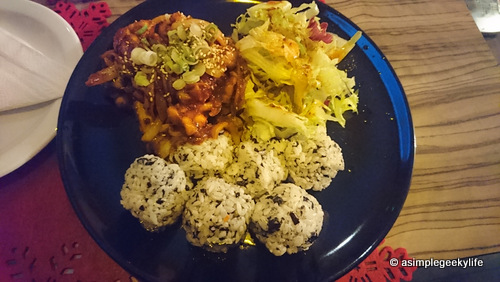 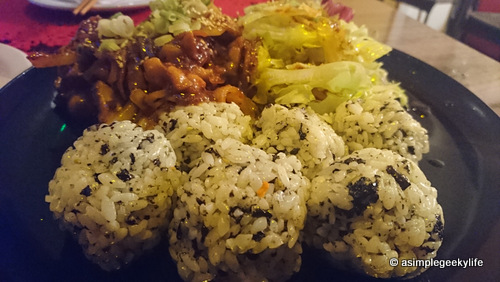 The chicken was indeed spicy. I had to blow my nose a few times. It had a good mixture of spices, seasoning and veggies.

The rice balls helped with the cooling down of the spicy chicken. They were well seasoned. I wanted more! Maybe I should learn how to make them for lunch. ¬_¬”

Was happy I ordered this, but I what I really wanted was the fried chicken. Heheh. Maybe next time!
Total cost came to around £15-£16… Less than £20 anyway. Bad memory and forgot to take the price down.
My geeky rating: 4.9/5 – just because of my fried chicken situation… maybe I should have persuaded that I could eat the whole chicken. But will definitely make it for a lunch time special!!
Good points:
– Friendly service
– Good portion sized food
– Like the slightly new look – new name and menu
– Still a good place for karaoke!
– They’ve added a bell to the table for staff to come to you… reminds me of Japanese table service!
Bad points:
– Only the bad lighting from where I was sitting